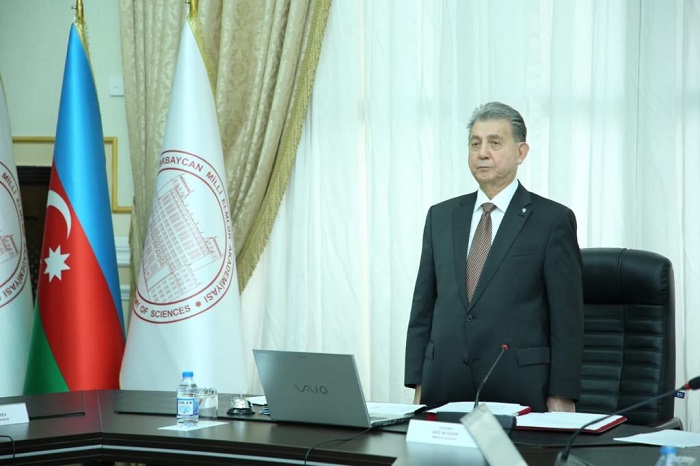 Next meeting of the Presidium of the Academy of Sciences

ANAS President, academician Akif Alizadeh awarded the winners of the competition of ANAS Presidium for "For fruitful activities in the field of popularization of science", as well as the competitions "Young Women in Science" and "Master 2019", which were held in connection with the "Science Day".

Stressing that, the aim of ANAS to comply important tasks for the organization of Free Trade Union, chairman noted that, the Free Trade Union showed commitment, unity and solidarity aimed at obtaining fruitful results during the reforms carried out at the Academy.

Further, the meeting noted the plan of admission to doctoral and PhD programs of higher educational institutions and scientific organizations of the Azerbaijan Republic for 2018 was approved by the order of the Cabinet of Ministers of the Republic of Azerbaijan dated November 24, 2018.

The meeting adopted resolutions on the establishment of the “Molecular and Cellular Oncology Laboratory” at ANAS Institute of Biophysics jointly with the National Center of Oncology of the Ministry of Health of the Republic of Azerbaijan and on the approval of the “Plant & Fungal Research” journal, which is a scientific publication of the Institute of Botany of ANAS.

Then, resolutions were issued on the assignment of the senior researcher of the Shamakhi Astrophysical Observatory after Nasreddin Tusi of ANAS Hamail Adigozalzade to the Potsdam Institute of Astrophysics after Leibniz (Federal Republic of Germany), Yusif Abiyev, head of the department of the Botanical Garden of ANAS, to Karadeniz Technical University (Turkey); Elton Mamedov, Ph.D. in agricultural sciences to Adam Mickiewicz University (Poland); Shamo Tapdigov, Ph.D. in Chemistry to National Institute of Polymers, Composites and Biomaterials of the National Research Council Italy

In addition, resolutions were adopted on holding the 90th anniversary of the Institute of Petrochemical Processes after Academician Yusif Mammadaliyev of ANAS and the 100th anniversary of ANAS National Museum of Azerbaijan History.