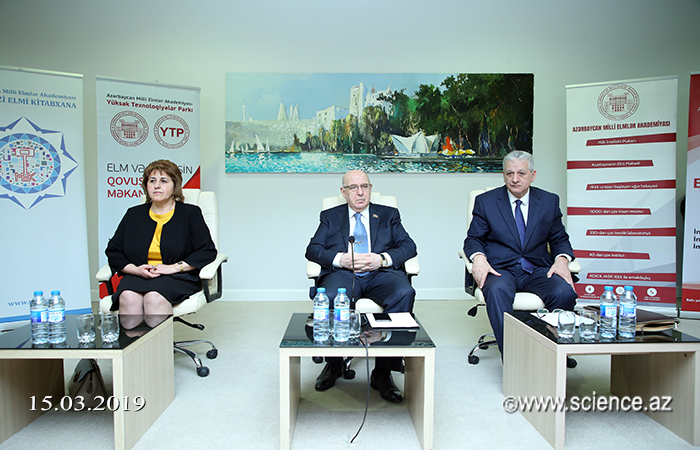 “Science Week" is over

Academician-Secretary of the Division of Biological and Medical Sciences(DBMS), academician Ahliman Amiraslanov stressed the successful completion of the "Science Week", held in accordance with the Order of AR President Ilham Aliyev on the establishment dated March 27 - Science Day in Azerbaijan.

He noted that, the holding of such events plays an important role in conveying to the society the significant scientific successes of young scientists and specialists, as well as in developing their skills in conducting discussions.

Director of ANAS High Technologies Park, PhD in Economy Nazim Shukurovnoted that, on the last day of “Science Week” are planned presentations, covering the scientific work of the DBMS. He stressed that, in conclusion, the winners of the three competitions were announced. Director also thanked the participants of the event.

Then, Vice-President of ANAS, Director of the Institute of Molecular Biology and Biotechnology, academician Irada Huseynova informed that, in the molecular biology area were achieved significant results, and the presentation on these scientific works were delivered during the "Science Week". Academician noted that, the event will play a great role in solving actual problems.

Director of the Institute of Genetic Resources, corresponding member of ANAS Zeynal Akparov stressed that, the "Science Week" made a significant contribution to the coverage of projects, scientific research and results, at the same time in the formation of scientific interest among young people.

It should be noted that, the Commission and the Group of Experts have been formed, Chairman of the Commission is Vice-President of ANAS, academician Ibrahim Guliyev and the members are academicians Nazim Mammadov and Fahraddin Gadirov.