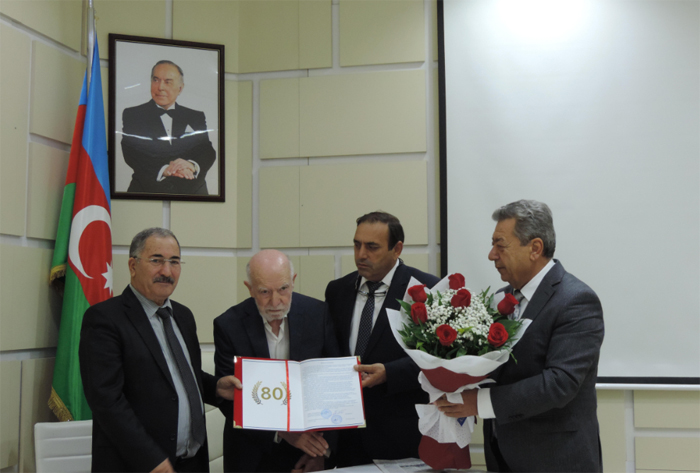 ANAS Institute of Soil Science and Agro Chemistry hosted an event devoted to the 60th anniversary of scientific and pedagogical activity and 80th anniversary of Chief of the laboratory, a well-known soil scientist, Honored Scientist, Professor Gerayzade Akif.

Director of the Institute, corresponding member of ANAS Alovsat Guliyev told about the life of an outstanding scientist, comprehensive scientific work in the development of agrarian science. Development of soil physics in our country, especially in the field of energy, electricity, magnetic and optical properties of the soil, is associated with his name.

Then, on behalf of the students of the scientist, Doctor of Agrarian Sciences Chingiz Gulaliyev spoke about the importance of research Gerayzade Akif and shared his memories of him.

In his speech, academician Maharram Babayev said that, an outstanding scientist had created a scientific school on the theoretical and practical problems of soil physics in Azerbaijan. Having told about the training of highly qualified personnel, he congratulated Professor on his jubilee.

Then, the chairman of the Trade Union Committee of the Institute, Ph.D. in agrarian science Mammad Mammadov and chairman of the Council of Young Scientists and Spesialist Farid Mustafayev told about scientific, educational and social activities of the scientist.

As a result, it was decided to hold a scientific-practical conference dedicated to the 80th anniversary of Professor Gerayzade Akif, and published bulk of works by Society of Soil Scientists of Azerbaijan devoted to this jubilee.