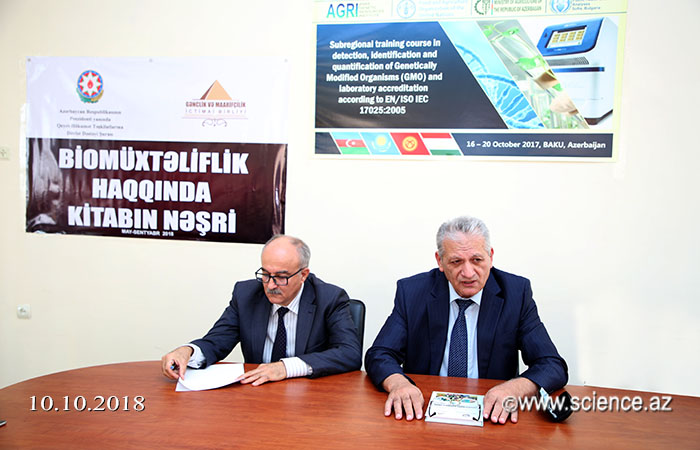 Presentation of the book "On Biodiversity in a Popular Language"

The publication was written under the co-authorship of the Director of the Institute of Genetic Resources, corresponding member of ANAS Zeynal Akparov, Academic Secretary of the Division of Biological and Medical Sciences, Ph.D. in Agrarian Sciences Afig Mammadov and Ph.D. in Biology Vagif Amikishiyev.

The publication was published within the framework of the ongoing project “Publication of a book on biological diversity” of the Public Association “Youth and Education” by the financial support of the Council of support of non-governmental organizations under the President of the Republic of Azerbaijan.

Opening the event, Z.Akparov informed the audience about biodiversity and noted the importance of its conservation for humanity. The scientist spoke about the damage caused by human activity.

Z.Akparov said that, in 1992 the United Nations adopted the International Convention on Biological Diversity in order to protect the biological heritage of the planet, our state joined this document in 2000.

In accordance with the principles of the Convention, protected areas have been expanded to protect biodiversity, have been created new national parks and state nature reserves, appropriate measures have been taken to strengthen the legal framework in this area and harmonize existing legislation with international law.

Z.Akparov stressed that, the Department of Biological and Medical Sciences, including the Institute of Genetic Resources, carried out scientific work in this direction and on the preservation of the country's gene pool to bring it to future generations.

Speaking further, Afig Mammadov said that, the publication of the book is a valuable contribution to the 90th anniversary of academician Jalal Aliyev, who has been leading this research for many years. In addition, the reader was given simple information about the effects of biodiversity on human life and the stability of ecosystems, changes in the influence of anthropogenic factors and global climate change.

Note that, reviewer and author of the "Preface" is Director of ANAS Institute of Botany, academician Valide Alizadeh.