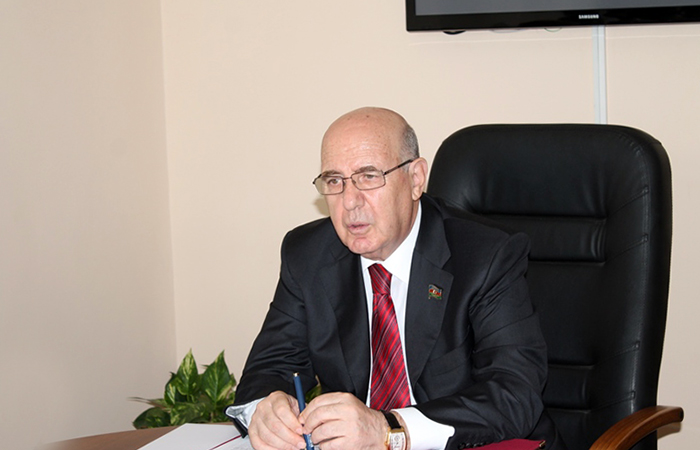 Next bureau assembly of the Division of Biological and Medical Sciences

Presidium of ANAS held a next bureau assembly of the Division of Biological and Medical Sciences (DBMS) on September 27.

Event attended by Academician-Secretary of the Division, academician Ahliman Amiraslanov, members of the bureau, heads of scientific institutions and organizations, members of the department, as well as representatives of the Oncological Clinic of the Azerbaijan Medical University.

Initially A.Amiraslanov congratulated on the 60th anniversary of the head of Laboratory of Soils Melioration of the Institute of Soil Science and Agro Chemistry, doctor of agricultural sciences Mustafayev Mutafov and awarded the Honorary Diploma of the Department. He also congratulated head of Botany Department of Ganja State University, corresponding member Vagif Novruzov on his 75th birthday and presented an honorary diploma.

In advance, Academician-Secretary of the Division Academician Ahliman Amirlaslanov informed on the issues of agenda.

Corresponding members of ANAS Zeynal Akperov and Nuru Bayramov briefly told about the scientific mission in the Iranian Islamic Republic.

The next scientific and organizational issue was the celebration of the 120th anniversary of the famous biologist Academician Valery Ulyanishev. It was noted that, the scientist has done significant work on the creation, development and improvement of human resources in the field of microbiology in Azerbaijan.

V.Ulyanishev's scientific studies are devoted to mycology and phytopathology. In November of this year, the anniversary ceremony of an outstanding scientist is planned.

Then, it was decided to hold the 70th anniversary of the director of the Sheki Regional Research Center, Ph.D. in Physics and Mathematics, Associate Professor Yusif Shukurlu and head of the Laboratory of Soil Reclamation of the Institute of Soil Science and Agrochemistry, Doctor of Agricultural Sciences, Associate Professor Farhad Sadigov.

At the meeting, the sides exchanged views on the personnel issues of a number of scientific institutions and made appropriate decisions. Academician - secretary instructed the heads of relevant institutions to draw up proposals within the framework of the newly signed Agreement of Intentions between ANAS and the Minister of Agriculture.