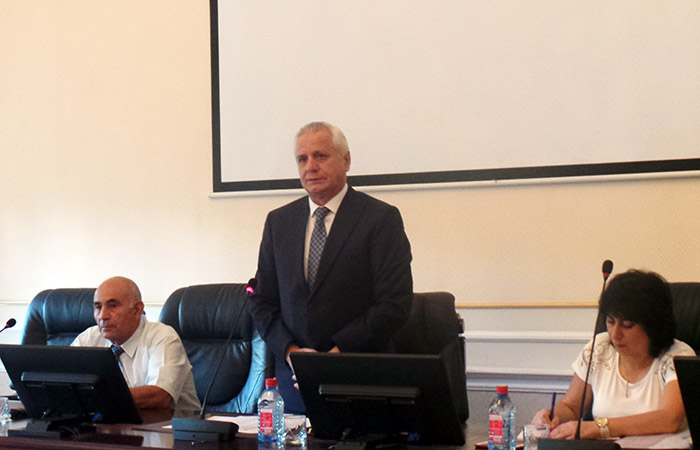 Opening the event, the chairman of the Free Trade Union, Doctor of law, Professor Habil Gurbanov noted the importance of establishing the Organization of Free Trade Union in new scientific institutions of ANAS and expressed his recommendations in connection with the election of chairmen and members of these organizations.

Further H.Gurbanov informed that, for ANAS employees since the beginning of this year has been organized the food and agricultural fair. He noted that, local farmers and producers of fairs offer consumers 30 different types of food and agricultural products at a price 20-30 percent lower than the market price. Since October of this year, the organization of fairs is planned to be held regularly.

The Chairman noted that, the number of appeals has increased in comparison with previous years, all appeals are considered in a timely manner and they are given positive answers. He stressed that, the trade union members made a significant contribution to the social and economic development of our country.

The joint competition of the Presidium of ANAS and the Confederation of Trade Unions of Azerbaijan for young scientists of the Academy on the occasion of the 95th anniversary of the national leader Heydar Aliyev was announced. The main goal of the contest was to stimulate the activity of young scientists who conduct research in order to solve current and current scientific problems and create additional creative opportunities for them. According to H.Gurbanov, 14 young scientists of the Academy were awarded by the Confederation of Trade Unions of Azerbaijan.

At the meeting the deputy head of the Office of Administration of ANAS Sardar Aliyev, chairman of the Trade Union of the Institute of Physics Sitara Bagirov and others spoke.