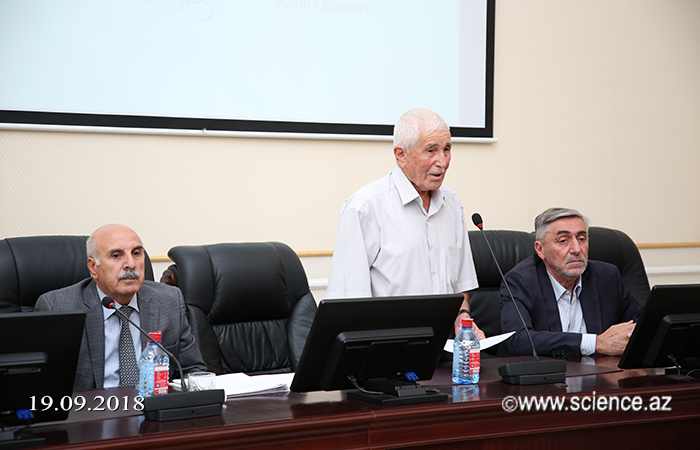 A report-elective meeting of the Joint Council of Veterans of the National Academy of Sciences of Azerbaijan on activities for 2013-2018 was held.

Opening the meeting, deputy chairman of the council Eldar Guliyev informed about the issues on the agenda. He recalled the adoption of the "Law of the Republic of Azerbaijan on Veterans" on June 28, 1994, and that this document allows to provide social and legal protection for veterans, provide them with a living space, exercise rights to work without any restrictions, and participate in socially useful activities.

Then, was listened report by chairman of the Joint Council of Veterans, correspondent member of ANAS Rafik Gasimov for the 5-year period of the Council's activity.

He also said that, currently the Veterans Council unites 1633 veterans. In 2014-2018, 588 of them were awarded the title of Veteran of Labor and handed the certificate.

For 2014-2017 82 veterans were granted a one-time allowance, 50 people received the right to preferential food, and 53 veteran Veterans Council s were granted trips to the sanatorium. In general, in the period of 2013-2018. 14 meetings of the Veterans Council took place. At the end of his speech R.Hasimov noted that, veterans are the gene pool of our people, as well as the importance of providing them with care and attention.

Chairmen of the Councils of Veterans of the Institute of Linguistics of ANAS, Kamil Veliyev, Ph.D. in Philology, ANAS Rauf Azizov Institute of Petrochemical Processes, Rasul Ismailov Institute of Geography, Balajahan Talibov Institute of Economics and Shamakhi Astrophysical Observatory Sabir Aliyev spoke in the discussions with suggestions and recommendations.

Speaking at the event, Zulfugar Farzaliyev, head of the Office of Public Relations and Science Popularization, touched upon the solution of the problems raised by the veterans. He noted that the United Trade Union Committee of ANAS equips the trade unions of institutions with medical supplies and medicines, and regular work is planned for this work. In addition, Z.Farzaliyev said that, at the joint board of ANAS and the Ministry of Health, an initial agreement was reached to open a clinic in the academy, and this issue will soon be resolved, and the Academy's leadership will be offered to issue certificates to all veterans, and preparation of maps on the use of the right to preferential food.

As a result, the activity of the Joint Council of Veterans of ANAS was considered satisfactory. Guided by the law, it was decided to stimulate the work of veteran activists on the ground, help the needy veterans, improve the work carried out by veteran councils, and strengthen the education of youth in the spirit of patriotism. In addition, it was decided to strengthen the links between the Union and the United Trade Union Committee of ANAS, and the links with the trade unions of the institutes for implementing the necessary measures to improve the material well-being of veterans working in scientific institutions and organizations.

Then, a number of current issues were discussed at the meeting.