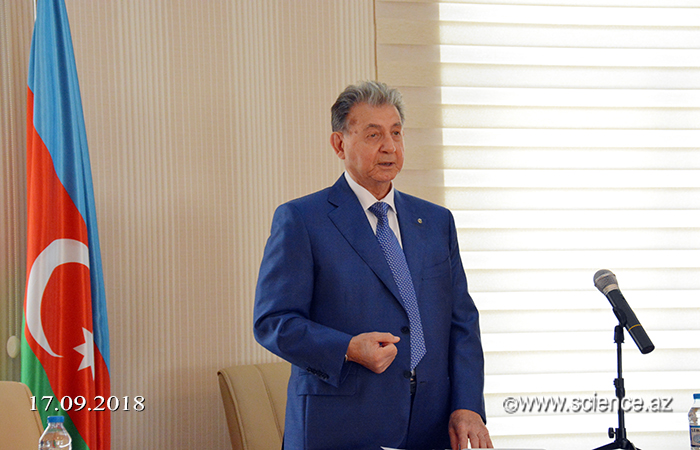 Scientific Center of the Azerbaijan National Encyclopedia held an event dedicated to the Day of Knowledge On September 17.

Academician Akif Alizadeh stressed that, the training of highly qualified specialists and scientific personnel in the society serves to raise the level of education and scientific research in the country, with the support of the country's leadership for the first time in 2015, an admission to the master's program was held in ANAS, it is held in priority specialties: "Home the purpose of attracting young people to the scientific environment, enhancing their scientific thinking. These young people are scientists who determine the scientific future of ANAS".

The President of the Academy also noted that for the 2015/2016 academic year 19 students entered the magistracy, 56 students in 19 specialties for the 2016/2017 academic year, and this year their number has reached 67. This is an irrefutable fact that the students' interest in the master's program in the NANA is growing rapidly.

Akif Alizadeh said that, masters who study at the academy will practice in scientific laboratories, get acquainted with the latest achievements of science, defend the thesis on modern and perspective topics and communicate with outstanding scientists. He also noted the creation of all conditions in ANAS for undergraduates in the field of science.

Then, head of the Office of Science and Education, corresponding member of ANAS Aminaga Sadigov told about the results of admission to the Academy's magistracy. Noting that, in 2018/2019 academic year in 19 specialties and 49 specializations in the magistracy received 67 people from them 13 scored more than 112 points, corresponding member of ANAS Aminaga Sadigov said that, this year in the competition for admission to the Master's program of the Academy in a total of 1124 bachelor's. The scientist also noted that this year for the first time the competition for admission was separately announced in the Russian and Azerbaijani languages of instruction.

Noting that, interest of young people in the ANAS and science increased, head of the department said that the most applications were submitted to the Institute of Genetic Resources for one planned place, and the highest result at the reception was shown by the graduate of the Institute of Control Systems.

Further, the undergraduates shared their impressions, and thanked for the conditions created for them. They were given student tickets, test books and gifts.