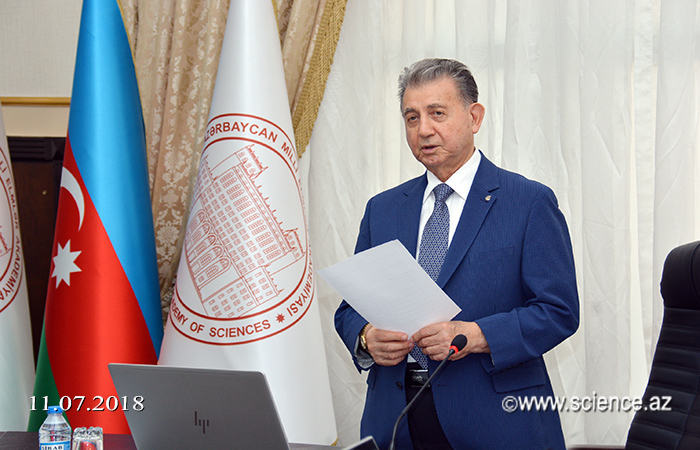 A number of important decisions were made at the Presidium's meeting

The next meeting of Presidium of ANAS was held on July 11. Academician Akif Alizadeh, President of ANAS, informed the participants about the agenda.

The action plan on the 100th anniversary of Baku State University was discussed at the event., said that Baku State University, which has an outstanding role in the socio-political, cultural, spiritual and intellectual development of the Azerbaijani people, is on its 100th anniversary. President of the Republic of Azerbaijan Ilham Aliyev signed a decree on holding the jubilee of this educational institution. Presidium made a decision on the 100th jubilee of Baku State University in accordance with this document, academician Rasim Alguliev, academician-secretary of ANAS underlined.

After the discussion, Presidium approved the Action Plan on the 100th anniversary of the Baku State University and gave relevant instructions to the Academy's scientific departments and enterprises.

By another decision of the Presidium, academician Vagif Farzaliyev has been appointed as academic secretary of the Department of Chemical sciences.

The meeting discussed the issue of new structures of the scientific divisions of ANAS. It was noted that the Bureau meeting of each division held elections to the deputy secretaries and bureau members, and the results were presented to the Presidium. Following the discussions, the Presidium has approved the new composition of the Bureau of Chemical Sciences, Earth Sciences, Biology and Medical Sciences, Humanities and Social Sciences.

At the end, the issue of personnel was discussed. By the decision of the Presidium, Doctor of Mathematical Sciences Rovshan Bandaliyev has been appointed chairman of the coordination council of ANAS professors.