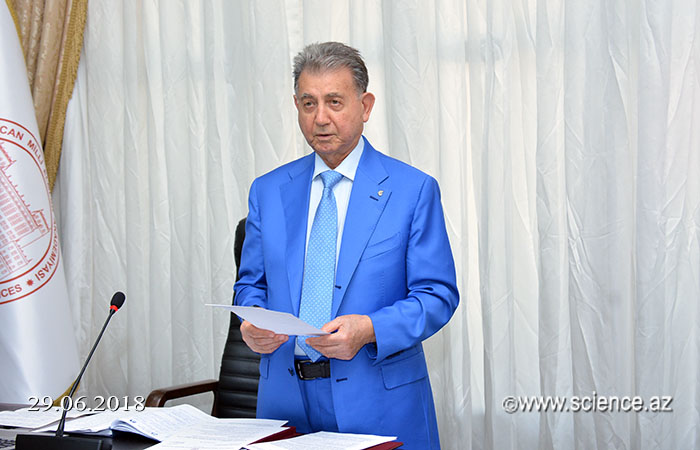 The first meeting of Presidium of ANAS was held on June 29.

Academician Akif Alizadeh, president of ANAS, presented awards to the winners of the competition, dedicated to the 95th anniversary of the national leader Heydar Aliyev. According to the results of the contest, 14 young scientists were awarded.

Then the winners of the "Master-2018" competition were awarded.

The head of ANAS also spoke about the "Doctrine of Development of Science of Azerbaijan" project. The project aims at improving the management, organization and financing of science, preparation of highly qualified staff, directing the priorities of scientific research to the socio-economic, cultural and social problems of the country, integration of science and education, strengthening the normative-legal base and information provision, improving the social security of scientific workers.

The next issue on the agenda was related to the division of duties among members of the Presidium of ANAS. The distribution of tasks among the new members of ANAS Presidium and members of ANAS, elected at the General Meeting of the Academy on June 8, has been approved.

The next question was about the effectiveness of the activity of the Presidium of ANAS. Speaking on the issue, the head of ANAS said that it is necessary to implement a number of measures to improve the activity at the level of modern requirements. He emphasized the importance of the issues submitted to the academic discussion in accordance with the directions of the Presidium of the ANAS, the scientific challenges of the modern world, the policy carried out by our country in the field of scientific activity and the principles of reforms implemented in academy.

Later, a number of assignments were given to ensure the implementation of the tasks arising from the Decree of President Ilham Aliyev dated 14 November 2017 on the occasion of the 100th anniversary of Baku State University.

At the end a number of personnel issues were considered.