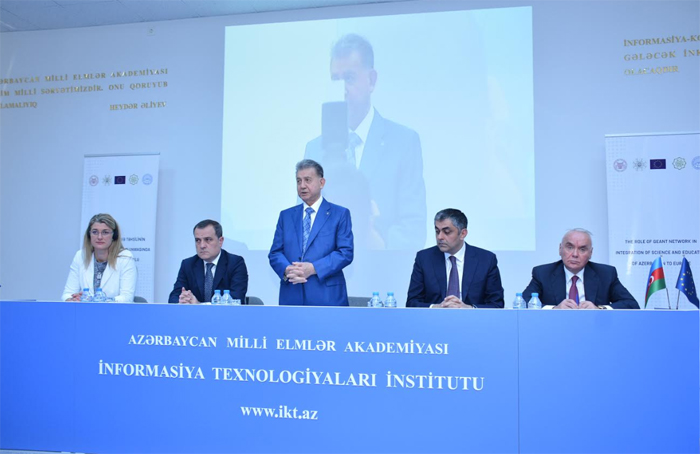 In a globalizing world, where information technologies are rapidly evolving, new demands are put forward to science and education. Development of information and communication technologies creates great opportunities for effective, flexible integration of science and education, exchange of experience, development of partnership and collaboration in this area.

Azerbaijan National Academy of Sciences (ANAS) also pays special attention to the integration of science and education and strengthening of international cooperation in accordance with state policy. AzScienceNet science computer network at ANAS provides high-level Internet services to scientific institutions and organizations of the Academy and ensures integration of Azerbaijani science into world science. AzScienceNet was admitted to membership in the European Association of Science and Education Network (GEANT) as national operator in 2015. The Institute of Information Technology of ANAS establishes broad cooperation with GEANT and represents the Azerbaijan in the EaPConnect project, supported by the European Union for the purpose of creating an electronic infrastructure for science and education in the Eastern Partnership countries.

The main purpose of the meeting on "Role of GEANT Network in integration of Azerbaijan science and education into Europe" held at the Institute of Information Technology of ANAS on June 22, 2018 was to present the EaPConnect project, its capabilities and contribution to science and education integration in Azerbaijan, as well as, sign a cooperation agreement between AzScienceNet and Educational System Informatization Department of the Ministry of Education.

The meeting was attended by heads of ANAS, Ministry of Education, Ministry of Foreign Affairs, Ministry of Transport, Communication and High Technologies, as well as leading universities and research institutes and representatives of EaPConnect project.

Academician Akif Alizadeh, president of ANAS, noted that the meeting assumes a great of importance for the science and education of Azerbaijan. The scientist said that in line with the general trends in the world, the formation of a knowledge-based economy based on high technology in Azerbaijan set as a goal. The knowledge of the economy requires, first of all, the development of a quality science and education system in the country in line with the requirements and challenges of the modern era and the establishment of an effective cooperation between these two areas. He also pointed out that these issues were reflected as one of the priorities in the "Azerbaijan 2020: Vision for the Future" Development Concept, which defines the development trends of our country in the near future.

The head of ANAS highlighted some of the views expressed in the Joint Declaration of the Eastern Partnership Summit, which was attended by President Ilham Aliyev of the Republic of Azerbaijan on November 24, 2017. He noted that the importance of the integration of science, education and innovation systems in the relevant countries would be reflected in the increase of productivity and competitiveness in the relevant fields, and that access to the GEANT network would reduce digital inequality in the respective countries.

President of ANAS spoke about business cooperation between AzScienceNet and Azerbaijan Educational Network. He said that 13 higher education institutions of our country joined the network of AzScienceNet within the framework of this cooperation and noted that currently work in other universities is continuing in this direction.

Academician A.Alizadeh also touched upon the cooperation agreement to be signed between Institute of Information Technology of ANAS and Educational System Informatization Department of the Ministry of Education. In terms of jointly ensuring the interests of science and education institutions in the field of ICT in international organizations, the agreement is very important for the integration of Azerbaijan's e-science and e-learning environments.

Minister of Education of the Republic of Azerbaijan Jeyhun Bayramov informed about the work done on integration of science and education in Azerbaijan.

Minister of Transport, Communications and High Technologies of the Republic of Azerbaijan Ramin Guluzadeh spoke about cooperation relations with the European countries in the field of ICT and prospects in this field.

Deputy Minister of Foreign Affairs of the Republic of Azerbaijan Mahmud Mammadguliyev delivered a speech on "European Union and Azerbaijan: Cooperation and Prospects".

The director of the institute also gave detailed information about the services offered by AzScienceNet network, its development stages, infrastructure and opportunities.

At the end, AzScienceNet and Educational System Informatization Department of the Ministry of Education signed an agreement on cooperation. The agreement was signed by President of ANAS, academician Akif Alizadeh and Minister of Education of the Republic of Azerbaijan Jeyhun Bayramov.