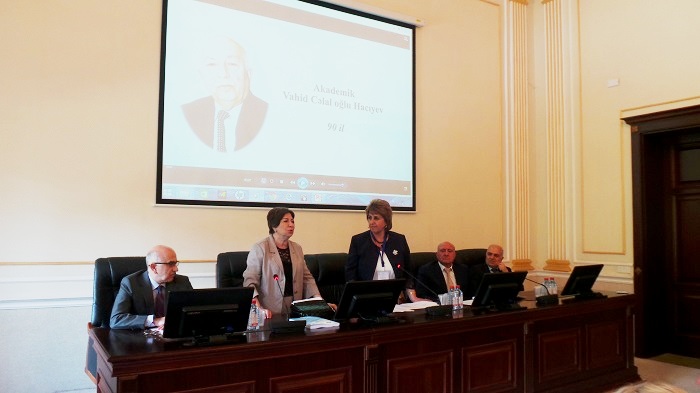 The scientific conference titled "New Challenges in Botanical Studies", dedicated to the 90th jubilee of academician prominent botanist scientist, laureate of "Honor Badge" and "Glory" orders Vahid Hajiyev, was held in the Main building of ANAS.

The event, organized by ANAS Institute of Botany and Azerbaijan Botanical Society, started with a minute of silence.

Opening the event, Vice President of ANAS, acad. Irada Huseynova spoke about the life and activity of V.Hajiyev, his contribution to the development of botanical science in our country. She noted that for many years, the scientist conducted geobotany studies in the Greater and Lesser Caucasus, as well as in highland meadows of Azerbaijan, paying special attention to the problems of flora systematics, vegetation cover, useful plant resources, rare and endangered plant species.

I.Huseynova said that the academician had drawn the map of "vegetation cover of Azerbaijan" twice, distinguishes the highland meadows for the first time and classifies them at the associative level.

According to the vice-president of ANAS, under the leadership of the academician, the vegetation of winter and summer pastures of Azerbaijan has been studied, and the scientific bases of their protection, reproduction and efficient use have been developed.

Then, director of the Institute of Botany, academician Valida Alizade made a report on the scientific-pedagogical and organizational activities of V.Hajiyev. She noted that the prominent scientist was born in Shusha in February 1928 and moved to Tartar region with his family during his childhood.

V.Hajiyev had defended PhD in 1952, in 1966 he defended his doctoral dissertations, and in 1970 he became professor. Botanist scientist was elected as a corresponding member of the Academy of Sciences of the USSR in 1983 and active member in 1989, the speaker underlined.

Noting that the scientist actively participated in various floristic, systematic and other expeditions in various years, particularly in the Solar-84 and Sun-85 experiments, she added.

Vahid Hajiyev's research was reflected in more than 350 articles and 12 monographs. Director of the Institute noted that the activity of the scientist was highly appreciated by the country's leadership, in 1981 he was honored with the “Order of Honor” and the “Order of Glory” in 2004.

Director of the Institute of Additives Chemistry of ANAS, academician Vagif Farzaliyev, correspondent member of ANAS Vagif Novruzov, laboratory director of Botany Institute, Doctor of biology, Sayyara Ibadullayeva, department head of the Institute of Genetic Resources, Doctor of biology, Aydin Asgarov, Head of Botany Department of BSU Elshad Gurbanov and others shared their memories of the scientist.

A documentary film about Vahid Hajiyev was also shown at the conference.

Finally, the son of academician, doctor of medical sciences, professor Rasim Hajiyev expressed his gratitude to organizers and participants of the event.

It should be noted that during the two-day conference discussions will be held on "Plant Systematics, Evolution and Diversity", "Microscopic Studies: Diversity, Systematics and Evolution", "Plant Resources and Efficient Uses", "Physiology, Biochemistry and Biophysics of Plants" and other sections will be heard.