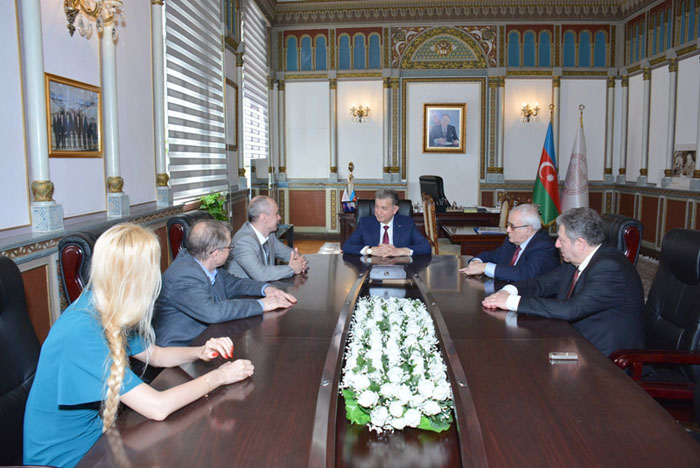 Perspectives of scientific cooperation between Azerbaijan and Russia discussed

Speaking about the ties of Russian scientists with various scientific institutes of the Russian Academy of Sciences, the head of ANAS noted that fruitful cooperation has been established in the field of oil and gas, geology, archeology, geography, philosophy, space research, etc. Underlining the role of the RAS leadership in strengthening these ties, reported that ANAS is interested in further expanding cooperation with relevant scientific and educational institutions in Russia in the future.

At the meeting were discussed the prospects of scientific cooperation between ANAS and the Russian Academy of Sciences. Akif Alizadeh told about the activities of some institutions of ANAS, including the activities of the High-Tech Park, events aimed at applying scientific results in production and commercialization of science. Also, the President of ANAS spoke about research in the field of geology, physics, information technology, geophysics, humanities and social sciences, studying mud volcanoes, oil and gas fields and other promising areas of Russian science.

Thanking the leadership of ANAS for the cordial welcome, academician Roald Sagdeev stressed the need to expand joint fundamental and applied research, attract young scientists to research that covers modern scientific fields, and the importance of implementing a bilateral exchange of personnel.

In turn, Sergei Tikotsky expressed his satisfaction with the close cooperation of the relevant institutions of the RAS with ANAS, underscored the need for further strengthening of scientific ties between the two countries in the future. Speaking about research in the field of physics of the Earth, S.Tichotski expressed his confidence that further bilateral cooperation in this field will be fruitful.

It should be noted that, for the results of the competition of the "Gold Medal of the Azerbaijan Republic after Nizami Ganjavi" in 2018, Academician Roald Sagdeev was awarded this award for the development of a scientific concept in the field of the theory of nonlinear plasma, controlled thermonuclear fusion and space physics.