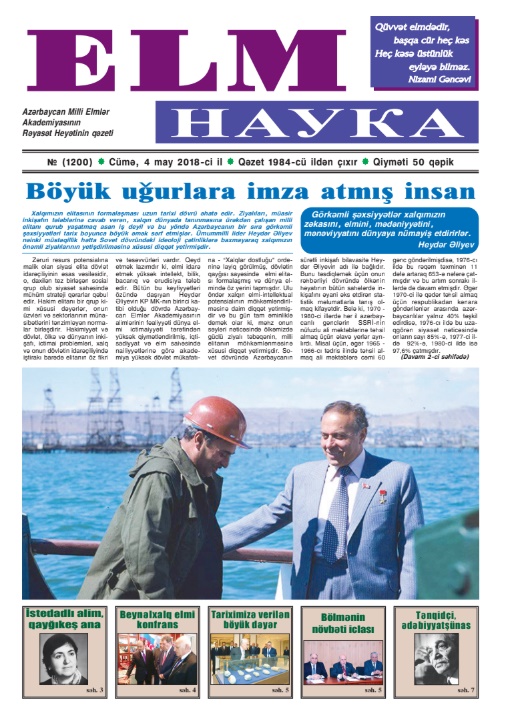 The next issue of the newspaper "Elm" published

The next issue of the “Elm” newspaper, the press body of the Presidium of the Azerbaijan National Academy of Sciences was published on 4 May 2018.

The newspaper covers materials reflecting the meeting of ANAS President, academician Akif Alizadeh with the delegation led by the rector of the Beijing University of Foreign Languages of China, Professor Pan Long, next meeting of the Department of Biological and Medical Sciences, V International Scientific Conference "Genocides against the Turkic-Muslim peoples in the XX century" in Gusar, event "Heydar Aliyev and folklore", the celebration of the 535th anniversary of the prominent Uzbek poet Zakhireddin Muhammad Babur at the Institute of Literature and new editions.

In addition, the new issue includes the articles "A scientist who has achieved great success", "A talented scientist, a caring mother", "Great importance attached to our history", "Connections that open up broad opportunities", "National press and democratic traditions" "Example of solidarity", "Critic, literary critic", etc.

The newspaper also has a place for articles "For merits in the development of science and education", "Academician Ramiz Mehdiyev was awarded the Order of Honor", "Giving Light", "Expansion of bilateral relations", "Open Doors Day", "Between Hammer and Anvil" The main center of ideas "," The Threat of Plastic ", etc.