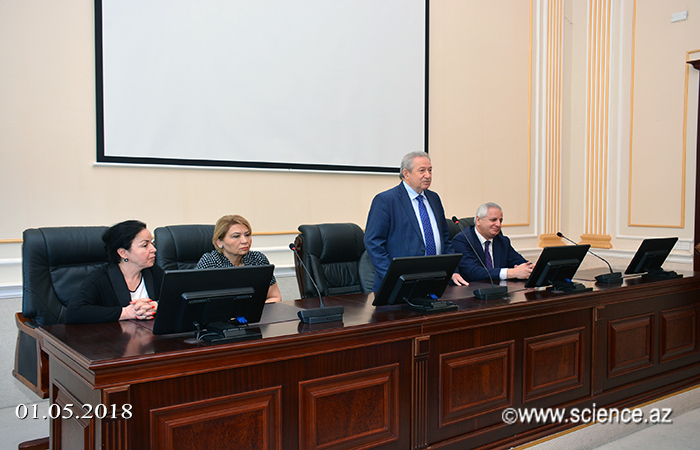 Presidium and ANAS Free Trade Union a meeting held the event purpose of which was to create the Women's Council of the Academy on May 1, 2018. The event was attended by the Vice-president of ANAS, academician Dilgam Tagiyev and the chairman of the Free Trade Union of ANAS, Professor Gabil Gurbanov.

Opening the meeting, academician Dilgam Tagiyev noted that, the female staff of the academy, 8 people are acctive members, 12 people are corresponding members and 9 are directors of the institutes of ANAS. Has brought to attention, that 70% of employees of the institute led by it are women. Speaking about the role of women in public life, he noted the advisability of creating women in the academy of the Council on the initiative of the Presidium and the Free Trade Union of ANAS.

Further Chairman of the Free Trade Union of ANAS, Professor Gabil Gurbanov, spoke about the importance of the establishment of the Women's Council of the Academy. He reported on the establishment of the Initiative Group, consisting of 7 people - Academician Dilgam Tagiyev, Professor Gabil Gurbanov, academician Nargiz Akhundova and Doctor of Historical Sciences. Maisa Ragimova, Doctor of Historical Sciences Mariam Seidbeyli, Professor Rena Mirzazadeh and Ph.D. in Physics of Famin Salmanov. A proposal was made for the election of the chairman of the Public Council of the State Committee for Family, Women and Children Affairs, Professor Rena Mirzazadeh, chairman of the newly created Women's Council. Noted on Rena Khanum a big role in public life, in particular, about her participation in the opening of the monument to Khojaly in Turkey, her studies on the problem of gender

Director of the House of Scientists Nurid Guliyev, deputy director of the Institute of Radiation Problems Ravan Mehtiyev and chairman of the Yeni Azerbaijan Party of the Yasamal district Khadija khanum also spoke at the event. They touched on the need to create women's council in ANAS. It was noted that in the past, the Council of Women acted in ANAS. Speakers also added that they are putting forward and supporting Rena Mirzazade's candidacy for the post of chairman of the Women's Council.

Rena Mirzazadeh expressed her gratitude to all those who initiated the creation of the Women's Council. Expressing her views on the role of women in society, she informed the audience about further activities.

At the end of the meeting, Rena Mirzazadeh was nominated for a vote, which was adopted unanimously. Dilgam Tagiyev instructed R.Mirzazadeh to create an organizational group of the Women's Council on the ground.