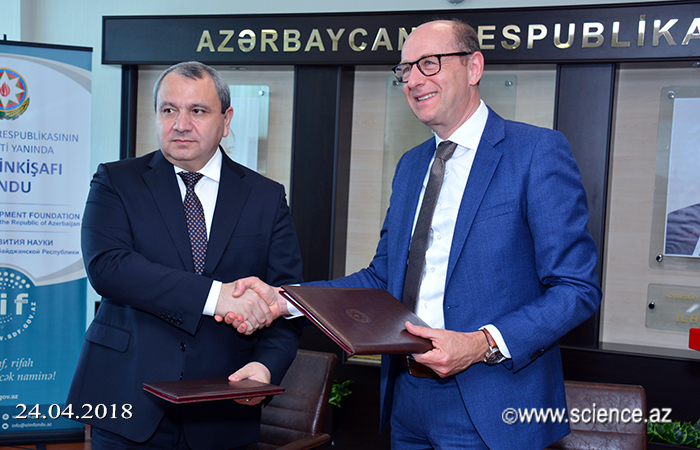 Science Development Foundation and Elsevier signed a memorandum of cooperation

The Memorandum will create opportunities for strengthening the ties of science, technology, innovation and business.

Science Development Foundation under the President of the Republic of Azerbaijan and one of the world's largest companies on scientific information, analytical analysis publications “Elsevier” signed a memorandum of cooperation on April 24.

First, Executive Director of the Science Development Foundation Elchin Babayev noted in his speech that, at the present stage important steps are being taken to develop science in Azerbaijan. He said that, today the country's scientists are tasked with turning Azerbaijan into a serious scientific center in the region: "To accomplish this task, scientists and specialists should take an active part in various grant projects and publish their scientific results in authoritative journals of the world."

E.Babayev expressed readiness of the fund he leads to assist researchers in this direction. He noted that at present cooperation is being established and joint projects are being implemented with prestigious publishing houses of the world, academic structures, at the same time, companies on the database. These initiatives once again confirm that Azerbaijan is open to world science and integrates into the world community.

He, speaking about the importance of the signed contract with "Elsevier", stressed that this cooperation will serve to raise the level of scientific journals in Azerbaijan, to educate scientists in connection with the preparation of scientific articles and the expansion of international scientific ties.

Further, Vice-President of "Elsevier" Haest Felix delivered a paper on the history and services offered by the company that he represents. He noted that the company, whose foundation was laid in Holland in 1880, represents about 2,500 journals and more than 33,000 e-books for the use of scientific researchers covering such well-known publications as The Lancet and Cell.

Noting the special importance of joint cooperation for both structures, H. Felix wished the Fund for the Development of Science success in its future activities.

Further, Elsevier's regional sales director for Turkey, Iran, Middle East and Central Asia, Tayphun Bashal, in his speech brought to the attention that according to the memorandum, extensive reports will be prepared regularly, in a comparative form reflecting the scientific indicators of Azerbaijani scientists.

ANAS Vice-president, academician Tofig Nagiyev expressed confidence that the memorandum will be useful for the further development of Azerbaijani science. Stressed the need for this cooperation in terms of presenting the country's scientists in prestigious world magazines and integrating into the international community.

Then, a memorandum of cooperation was signed between the two structures. The document was signed by Hast Felix and Elchin Babaev.

According to the memorandum, the parties will organize joint trainings, various events, unite efforts to strengthen cooperation between science, technology, innovation and industry business and work towards commercialization of scientific results and technology transfer.

The signing ceremony was also attended by the regional director for Central Asia and Azerbaijan Aliya Ospanova.

In conclusion, employees of "Elsevier" were presented with memorable gifts.