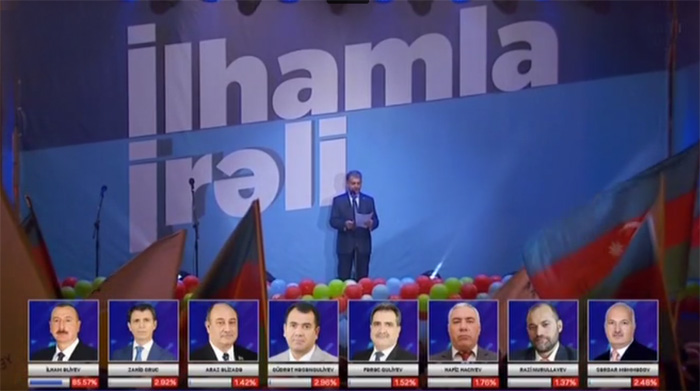 Speech by President of ANAS, Academician Akif Alizadeh at the "Ilhamla Ereli" Holiday Concert on the occasion of the election of the President of the Republic of Azerbaijan Ilham Aliyev, candidate of the New Azerbaijan Party:

Dear participants of the event!

Today, it is not only in the political life of our country, but also in the public life in general, and I would say it is a historic day. All our people are in a festive mood.

The wise and revered Azerbaijani people once again made a historic choice. Ilham Heydar oglu Aliyev voted for stability, development, socio-economic and cultural-moral progress, and democratic values in modern conditions with complicated political and economic realities. Our people have once again proved that Ilham Aliyev, the most worthy person to bring the Azerbaijani state and society to the future in the light of intellectual and moral values! The Azerbaijani people demonstrating their position in the elections proved that Ilham Aliyev's leadership is, first of all, demand of the time, the people's insistence!

I heartily congratulate all our people on this great and historic victory.

As I said, all our people are glad for this great historic victory. Azerbaijan intellectuals, the intellectual elite of our republic are experiencing feelings of pride and joy today.

This victory is also the victory of the New Azerbaijan Party. It would not be right to regard the activity of the New Azerbaijan Party as a political phenomenon from the point of view of the nationwide scale of its mission carried out during its activities. Our party has emerged as a nationwide movement that connects all segments of our people, especially the many intellectuals around it.

The implementation of large-scale infrastructure projects in our country in recent years, including the restoration of the historical Silk Road, the opening of the shortest and safest route connecting Europe and Asia - the Baku-Tbilisi-Kars railway, the production of over 2 billion tons of oil in Azerbaijan is becoming increasingly important at the global level. All this shows that by the successful state policy pursued by Ilham Aliyev, the strategy of "turning oil capital into intellectual capital" has been successfully implemented. At present, Azerbaijan has become a leading state in the region. Increasing the social welfare of the population, ensuring internal stability and security, strengthening the defense capacity of our country, as well as the work done in the fields of science, education and culture are a clear indication of this development.

Dear participants of the event!

Undoubtedly, Ilham Aliyev is the president of every citizen of Azerbaijan, irrespective of his / her ethnic, national, or religious affiliation. The source of power in Azerbaijan is the people. I express my deep gratitude to you for your choice. You voted for Ilham Aliyev, and you have voted for the development of Azerbaijan, the bright future, the path of democratic development and socio-economic progress of our country.

Thank you for your attention!