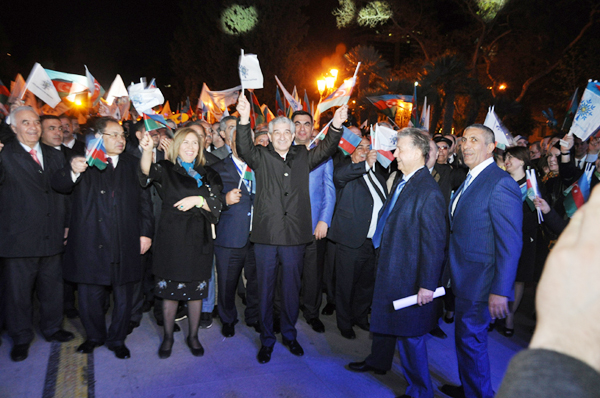 Great triumph of a magnificent victory

The presidential elections, which took place on April 11, culminated in the victory of the candidate from the New Azerbaijan Party Ilham Aliyev, who is the author of all the achievements of our republic over the past 15 years. On this occasion, a concert "Forward with Ilham" was held in Sahil Park. NAP members and citizens who supported President Ilham Aliyev in the elections celebrated this magnificent victory with great enthusiasm.

Deputy Chairman of the New Azerbaijan Party, President of ANAS, academician Akif Alizadeh called the day of presidential elections a landmark and historic event for Azerbaijan. He noted that, this victory shows that Ilham Aliyev is the most worthy person who leads the Azerbaijani state and society to the future in the light of intellectual and moral values.

Then, the concert program began, in the framework of which famous artists of our republic performed on the stage.

After the primary results were announced, the Central Election Commission was represented by Deputy Prime Minister, Deputy Chairman and Executive Secretary of the New Azerbaijan Party Ali Ahmedov. Ali Ahmadov, who announced the victory of the chairman of the New Azerbaijan Party, the President of the Republic of Azerbaijan, Ilham Aliyev, noted that this victory is the victory of the entire Azerbaijani people. Because the election of Ilham Aliyev as the President of Azerbaijan means development, progress, growth of Azerbaijan, preservation of stability and peace in the country.

According to Ali Ahmedov, this victory characterizes the development of Azerbaijan in the next 7 years. It means continuation of the work carried out over the past 7 years, an increase in the number of achievements of Azerbaijan: "I believe that this victory is the deep confidence and trust of the Azerbaijani people towards Ilham Aliyev. The people trusted their leader and voted for him. I want to congratulate AR President Ilham Aliyev on behalf of all of you on this victory and wish him strong health and new achievements for the development, prosperity and prosperity of Azerbaijan. At the same time, I congratulate the Azerbaijani people. Be always close to the president, on the way of Heydar Aliyev, which will lead us to a brighter future".

The festive concert continued with performances by famous artists.