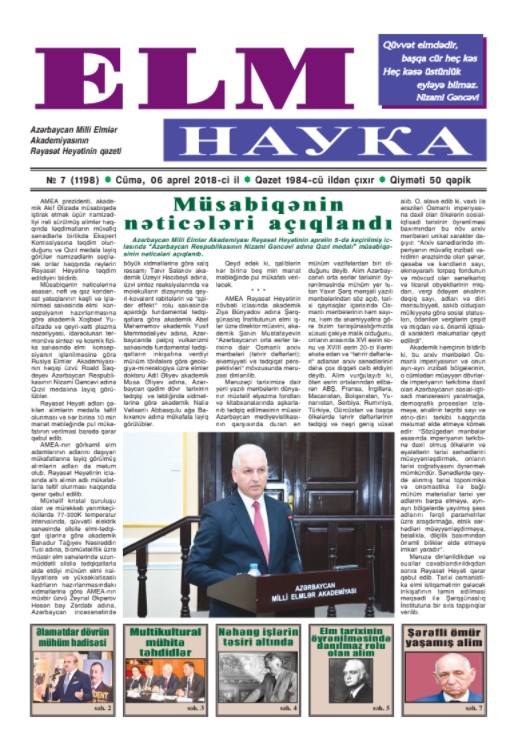 The next issue of the Elm newspaper contains interesting articles

The next issue of the Elm newspaper, the press body of the Presidium of the Azerbaijan National Academy of Sciences, was published on 6 April 2018.

The new issue includes, the results of the contest "The Gold Medal named after Nizami Ganjavi of the Republic of Azerbaijan", which was held at the National Museum of Azerbaijani Literature in connection with the presidential elections on April 11, the meeting of the Scientific Council of the Institute of Geology and Geophysics, the conference "Threats to the Multicultural Environment in Azerbaijan: Armenian vandalism and the policy of genocide - the last 100 years ", held with the joint organizational support of the State Committee for Work with Religions GOVERNMENTAL entities (state committee) and the Institute of History of ANAS, seminars Second Special Department of the Presidium of the machine, etc.

You can also see the articles titled "In the Presidium of the Academy of Sciences", "In the legendary city of oilmen", "Meeting of the bureau of the Department of Social Sciences", "Actual problem", "The creator of jet fuel", "At the crest of the political wave", " ashes, "" Mysterious phenomena that science cannot explain".