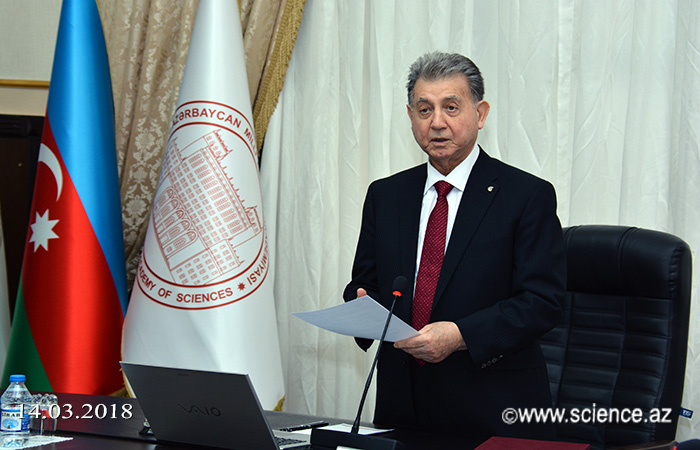 The report on the execution of the resolution of ANAS General Meeting from April 28, 2017

Guided by the tasks set by the President of the Republic of Azerbaijan Ilham Aliyev at the 70th anniversary of ANAS and the priorities defined by him, last year the academy carried out such important events as strengthening the scientific base of large-scale reforms being carried out in the country, providing defense, energy, food security of the republic, expansion of innovative activity, preservation and development of the Azerbaijani language in the context of globalization in accordance with the requirements the comprehensive study of the demographic situation in the country from the perspective of the socio-economic development of the republic, the increasing role of science in the development of industry and agriculture, etc.

The report stated that, the Permanent Working Group, which was established to ensure the fulfillment of the tasks facing the Academy in accordance with the Decree of the Head of State on the Approval of Strategic Roadmaps for the National Economy and the Main Sectors of the Economy, discussed, summarized and submitted to the Bureau all proposals , nominated by scientific departments and institutions, departments and departments, as well as other organizations operating under the authority of ANAS. After the discussion at the meeting of the Presidium, these proposals were adopted; also, corresponding assignments were given, aimed at fulfilling the tasks set in the road maps.

In connection with the implementation of the Law of the Republic of Azerbaijan "On Science", the Academy implemented important activities aimed at improving the scientific and organizational structure and legal framework in the country, coordinating scientific activities, expanding innovation, strengthening integration between science and education, etc.

It was reported that, in the field of biotechnology and genetic engineering scientific cooperation with Azeri scholars living abroad was expanded, scientists of the Academy took part in trainings in foreign countries and replenished their knowledge. Also, studies in the field of human genetics have been expanded, in the study of many diseases at the molecular level, some weighty results have been obtained.

The report noted that, the research work "Comparative analysis of mud volcanism in the Mediterranean, Black and Caspian Seas" and "Investigation of the macro- and micro-heterogeneity of the productive formation in connection with the formation and development of oil and gas deposits (on the example of deposits typical of the Yuzhno-Caspian Basin), which cover the issues of ecology, biology and geology of the Caspian Sea. At the same time, the implementation of the research program "Geomorphology and Di Amico as well as economic and ecological condition in a fluctuating sea levels in the Azeri part of the Caspian Sea region (using surveys with Azersky satellite)".

It was stressed that, within the framework of international cooperation with the support of various grant programs and centers (Erasmus +, Horizon-2020, European Institute, International Council of Botanic Gardens, Volkswagen Foundation, National Educational Center of Romania, Norwegian Center for International Cooperation in Education, etc.) employees of scientific institutions of ANAS took part in international trainings and scientific forums held in different countries of Europe, America, Asia, Africa and the CIS, conducted joint research investigations at the research laboratories.

The report noted that, ANAS High Technologies Park worked closely with foreign organizations to commercialize science in Azerbaijan and build an innovative ecosystem. A working group was established to implement joint innovation projects of the Park VT and Techno Park Erciyes (Turkey), a memorandum was signed with the Chinese-Russian Innovation Techno Park aimed at the commercialization of science in the Business Incubation Center of the Park VT. The Azerbaijan-China Transfer Center technologies.

It was reported that, last year the ANAS conducted multi-disciplinary research projects covering such topics as philosophical aspects of the formation, development and topical problems of the information society, the way of life and migration processes in the information society (social and philosophical analysis), the philosophical approach to national and moral values, the role of ICT in the formation of a knowledge society in Azerbaijan, changes that can occur in a socio-cultural environment through NBİC technologies, etc.

It was stressed that, there is a positive dynamics in the rating of the organization the SCImago Institutions Rankings (SIR), rating of ANAS has increased. When evaluating the activities of scientific institutions and employees of ANAS, data from such authoritative scientific platforms as Web of Science and SCOPUS are used.

In the reporting year, employees living in the dormitory of the Academy were provided with 61 apartments. At the same time, an agreement was reached on erecting a residential complex for employees of ANAS in an area of 7 hectares in the Saray settlement of Absheron district, and the work on providing these apartments on preferential terms was carried out.

Considering all the above, the Presidium considered the measures implemented in connection with the implementation of the resolution of the General Meeting of ANAS from April 28, 2017, satisfactory. It was entrusted to continue unfinished work in the current year.