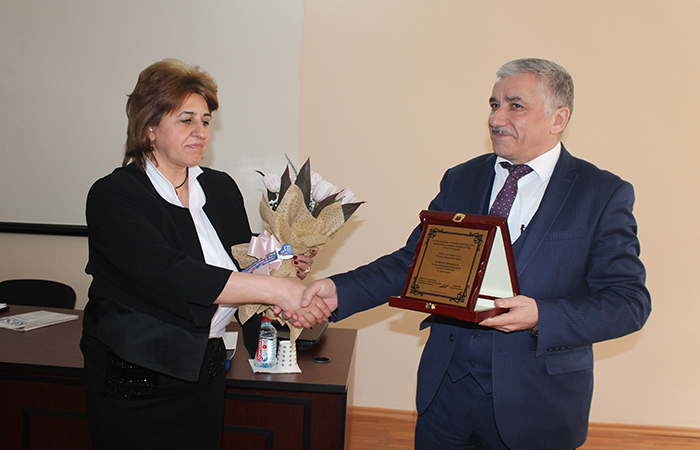 Institute of Molecular Biology and Biotechnology held an event dedicated to the 60th anniversary of the head of the bioinformatics laboratory of this institution, corresponding member of ANAS Ilham Shakhmuradov on March 13.

Opening the jubilee event, the director of the institute, academician Irada Huseynova told about the life path and rich scientific and pedagogical activity of the scientist. She noted that Ilham Shakhmuradov is a well-known scientist in the field of bioinformatics. He began his scientific activity in 1979 on the initiative of Academician Jalal Aliyev at the Center for Biological Research of the Academy of Sciences of the Azerbaijan SSR. As a result of the intensive work and scientific research of Professor I.Shahmuradov, a number of high-precision computer analysis tools have been developed that allow searching for transcription start sites and elements of its regulation, primary mRNA polyadenylation sites (PromH, PromHP, TSSP-TCM, nsite, nsiteM, nsiteH and POLYAR), the PlantProm database on promoters of RNA polymerase II plants PromH, PromHP, TSSP-TCM and POLYAR was developed, intensive labor and searching for high-precision search engine for human, animal and animal genes and search for polyadenylation sites. RNA PlantProm RNA from the promoters of RNA polymerase II for plants.

I.Huseynova brought to the attention that the scientist is also engaged in pedagogical activity, teaches a number of general and specialized courses in molecular biology, genetics and bioinformatics at the Baku State University, Azerbaijan Medical University and Khazar University. It was noted that the scientist is the author of more than 60 scientific articles, as well as the first terminological dictionary on bioinformatics in the Azerbaijani language.

Noting that, Professor I.Shahmuradov repeatedly represented our country abroad, the director of the institute emphasized that in 1999 he worked as a researcher at the Sanger Science

Center in the United Kingdom, 2000-2001 at the Heliks Japan Research Institute, 2001-2005 Department of Computer Science, Royal Holloway College, University of London. In 2007-2010, he was a professor at the Information Technology Institute of COMSATS in Pakistan. In 2015-2016 he conducted research in the Scientific and Technological University. King Abdullah in Saudi Arabia.

It was noted that, in 2015, according to the Order of President Ilham Aliyev, Shahmuradov was awarded the Order "Tereggi" for fruitful scientific and pedagogical activity.

Then, Academician I.Huseynova presented the scientist with the Certificate of Honor of the Institute.

Corresponding member of ANAS Novruz Guliyev, Professor Saftar Suleymanov, Doctor of Chemical Sciences Sirajaddin Sarkarov and others congratulated I.Shahmuradov on his 60th birthday, told about his high human qualities and shared his memories of the scientist.

In conclusion, a short documentary "Crossroads: from mathematics to biology" was demonstrated, which reflecting the life and scientific activities of the jubilee.