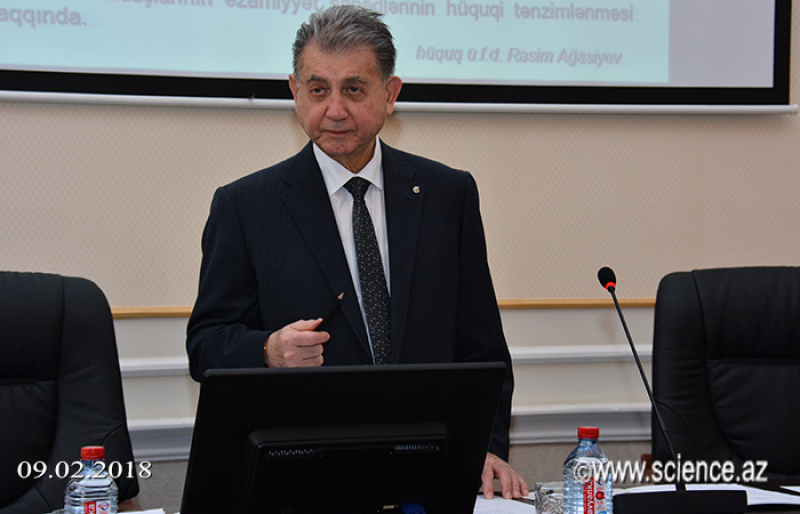 Board of Directors of scientific institutions of ANAS held a meeting

First of all, President of ANAS, Academician Akif Alizadeh brought to the attention of those present the letter of thanks of Chairman of the Board of Directors of the State Examination Center Maleyke Abbaszadeh for active participation of more than 500 Academy staff at the final and entrance examinations carried out by the SEC, scientific and methodical monitoring, preparation of teaching aids, duties assigned to them.

The head of ANAS noted that, in order to ensure the perfection of textbooks and teaching aids, the inclusion in the academic literature of scientific knowledge at the proper level, it is extremely necessary that scientists and specialists of the Academy continue their activities in this field in the future.

Then, was discussed the activity of the basic departments. In his speech on this issue, Academician Akif Alizadeh said that, ANAS is actively working towards the integration of science and education, as indicated by the activity in the institutes of the Academy of 16 basic departments of various universities. He noted that, at present in practical centers organized in scientific institutions of ANAS, students of higher educational institutions master the practical knowledge at a high level. President of ANAS gave instructions aimed at increasing the number of basic departments in scientific institutions in the future and creating an appropriate regulatory and legal framework.

Academician Akif Alizadeh said that, last year a group of scientists who achieved high scientific results was awarded the academic title of "Professor of ANAS". He noted the need for more active involvement of these scientists in scientific research and the process of training scientific personnel and gave corresponding instructions to the heads of scientific departments of ANAS. The head of ANAS said that, an integral part of multilateral reforms in the Academy is the evaluation of scientific, scientific, organizational and scientific-pedagogical activity of scientists and the stimulation of their work.

The next issue on the agenda was the implementation of activities in connection with the implementation of the NIZAMI project of the European Union's Erasmus + program. In his speech, the head of the Office of Science and Education of the Presidium of ANAS, correspondent member of ANAS, Aminaga Sadigov stressed that, the implementation of the project "NIZAMI" took place in the Action Plan to implement the Order of the President of the Republic of Azerbaijan "On additional measures to improve the business environment in the Republic of Azerbaijan and further improvement of the country's position in international ratings" dated July 13, 2016. The head of the Department said that, along with ANAS, the Ministry of Education, nine leading universities of the republic, as well as five authoritative universities of Germany, France, Spain, Sweden and the Czech Republic take part in the project. He noted that the project, launched in 2015, will be completed in October this year. Aminaga Sadigov added that, within the framework of the project a final report on the implemented activities aimed at improving the doctoral studies in our country and its structuring in accordance with the requirements of the Single European Higher Education Area, relevant proposals and recommendations will be prepared and a national electronic portal will be created about receiving education in doctoral studies. Aminaga Sadigov also added that, the next event will be held in Spain with the participation of foreign universities involved in the project.

At the event, Head of the International Relations Department of the Presidium of ANAS, Doctor of Philosophy in Biology Esmira Alirzaeva told about the participation of ANAS in the international program "HORIZON-2020". She noted that, the program gives domestic scientists the opportunity to participate in joint projects with foreign colleagues. The head of the department informed about the current situation, problems and perspectives of participation of Azerbaijani scientists in the program, new appeals for 2018-2020 within the framework of the program, events held by ANAS to increase the activity of participation in the program, as well as to improve the activities of the Network of National Coordinators.

At the meeting, Esmira Alirzaeva told the audience about the Vienna Convention and the requirements for the process of establishing relations with the accredited diplomatic missions of foreign countries, documents on cooperation signed with the scientific organizations of various countries and the rules for their preparation.

At the event, some issues related to the implementation of the Cabinet Regulation of August 11, 2016 No. 470-C were discussed. Head of Office of Law and Human Resources

Presidium of ANAS, Doctor of Philosophy on Law Rasim Agasiev put forward a number of proposals in connection with this issue. Also at the meeting R.Agasiyev told about the payment of extra wages to employees working in scientific institutions of ANAS under heavy and harmful conditions, legal settlement of travel documents of ANAS employees. After the discussions, a resolution was adopted on the preparation of normative documents with a view to the legal settlement of the above issues anew.