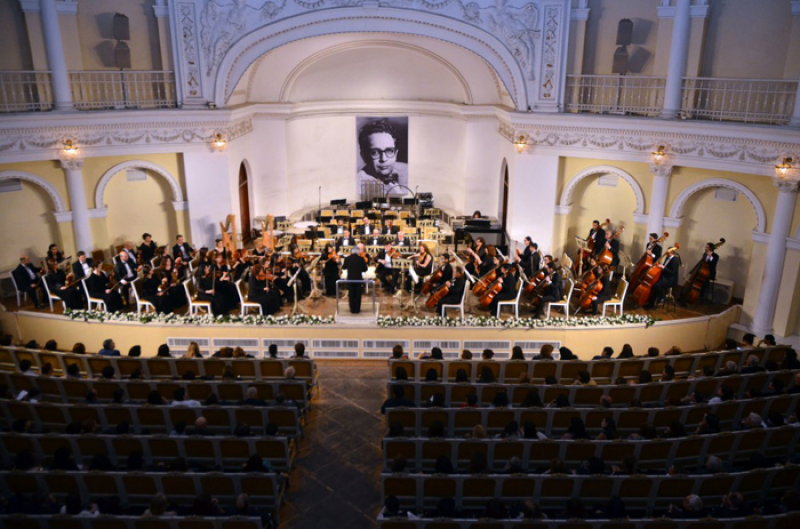 On February 5, prominent representative of Azerbaijani culture, an outstanding composer, scientist, teacher and public figure, People's Artist of the USSR, Hero of Socialist Labor, laureate of State Prizes of the USSR and Azerbaijan, Academician Kara Karaev’s 100 anniversary was solemnly celebrated.

Speaking at the event with the participation of officials of the state and government, well-known figures of science and culture, Deputy Prime Minister, People's writer Elchin Efendiyev noted that, holding a series of events dedicated to the 100th anniversary of the genius composer in our country is a historic event.

Elchin Efendiyev brought to the attention that throughout his creative activity, Kara Karaev appealed to individual classics. Here we remember, first of all, Nizami, since the theme of Nizami was the cornerstone of the composer's work - from "Autumn", written for the choir in his younger years, to the symphonic poem "Leili and Mejnun", the ballet "Seven Beauties", music to film Nizami. The humanism of Nizami, his quest for justice, even his utopia, apparently from the youth, harmonized with the inner world of Kara Karayev as a man and a master. Among the other outstanding personalities he addressed were Omar Khayyam, Shakespeare, Cervantes, Lope de Vega, Pushkin, Lermontov, Francisco Goya, Merimee, Edmond Rostan, Jalil Mammadguluzadeh and others.

Recalling Shakespeare's themes in the work of Kara Karaev, the Deputy Prime Minister noted that, the feelings of Hamlet, Othello, Cleopatra, Henry IV, emotions filled with purity, love and jealousy, betrayal and revenge, a whirlwind of unrest, a desire for power, The search for truth and the struggle for justice were expressed in Karayev's music at a level equal to the complex and contradictory inner world of Shakespeare's heroes.

Emphasizing that, Kara Karaev was still a teenager studying the basics of Azerbaijani folk music from Uzeyir Hajibeyli, and later studying in the class of Dmitry Shostakovich, the national writer noted that the graduates of the Karaev class passed on and transferred to the next generations the creative baton received from him. This creative relay, passing from generation to generation, acquires an ever larger universal scope.

In conclusion, the Deputy Prime Minister expressed his deep gratitude to President Ilham Aliyev, who signed a special order on the 100th anniversary of Kara Karaev, having duly continued this tradition laid down by the great leader Heydar Aliyev.