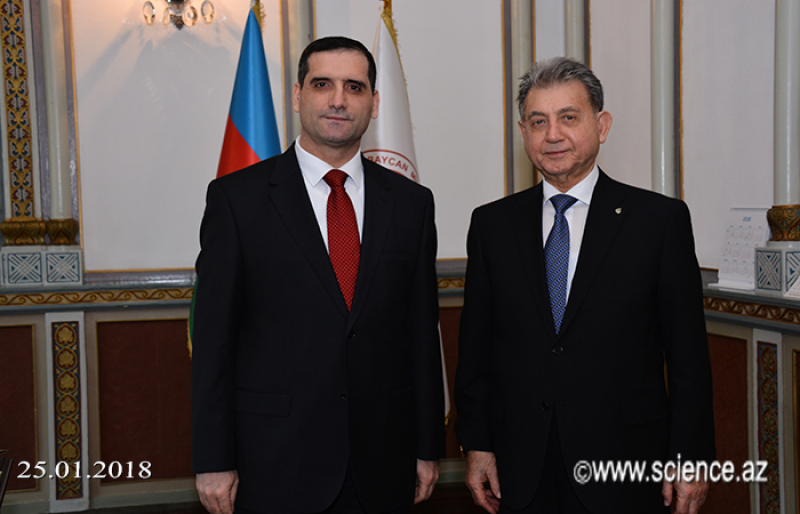 Within the framework of the meeting, academician A.Alizadeh spoke about the history of Azerbaijani-Turkish relations, cooperation and friendly relations between scientists of both countries. Speaking about the integration of science and education in Azerbaijan, as well as scientific and innovative projects, Academician A. Alizadeh stressed the need for further development of relations with relevant scientific institutions of Turkey.

ANAS Vice-President, academician Isa Habibbeyli spoke about the history of Azerbaijani-Turkish literary relations, and stressed that relations between our countries are based on the principles of friendship and partnership. Speaking about the rapid development of bilateral cooperation in many areas, the scientist noted that the signing of numerous documents contribute to further deepening of our relations.

Ambassador E.Ozoral expressed gratitude to the head of ANAS for a sincere meeting and merits in the development of bilateral relations.

At the meeting, the sides discussed the existing opportunities for the development of scientific cooperation between the two countries and the improvement of joint scientific research. It was also decided to hold in April this year an international symposium on the 100th anniversary of the genocide of Azerbaijanis in 1918 and in September this year - a joint international event dedicated to the liberation of Baku from the Armenian-Bolshevik occupation of 1918.

In conclusion, E.Ozoral invited a delegation of Azerbaijani scientists to the event dedicated to the 100th anniversary of the Azerbaijani Democratic Republic, which will be held in Turkey this June.

The meeting was also attended by Vice-President of ANAS, academician Ibrahim Guliyev and head of the International Relations Department of the Presidium of ANAS, Doctor of Philosophy in Biology Esmira Alirzaeva.