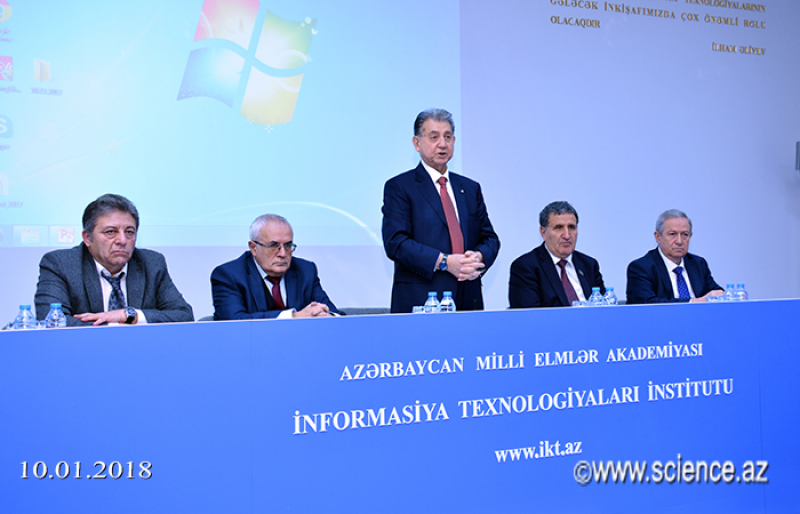 Next meeting of Presidium of ANAS

On January 10, the next meeting of the Presidium of ANAS has been held at the Institute of Information Technology.

Academician Nazim Mammadov, academician-secretary of the Division made a report on Scientific and Scientific-organizational activities of the Division of Physical Mathematical and Technical Sciences in 2017. He noted that in the academic year, fundamental and applied researches have been implemented in accordance with the "priority directions of scientific research in the Republic of Azerbaijan for 2014-2020" approved by the Presidium.

Considering some statistical data, N. Mammadov underlined that, 323 research works have been conducted on 82 subjects in 18 issues in the reporting year. 12 themes and 146 works have already been completed. 17 patents have been issued. 1,061 articles and conference materials have been published in 2017, 462 of them have been placed in high impact factor journals including to Scopus and Thomson Reuters, lined out the speaker.

Speaking about the work carried out in the field of science and education during the reporting period, N. Mammadov said that our academics are engaged in pedagogical activities at universities of several foreign countries. Speaking of consistent work on the integration of e-science and education, the reporter added that twelve universities under the Ministry of Education joined the network of AzScienceNet to access GEANT Science and Education Network, expanding the application of distance learning technologies, and distant learning courses.

Nazim Mammadov underlined that the results of the ten research works were implemented last year, strengthening cooperation between science and production, application of scientific research results and scientific-research expeditions: "The technology of increasing the oil productivity of the layers was created and China's famous Petrochina oil at Bohai Bay offshore field at the invitation of the company. ASAN Visa has been established on the order of the State Agency for Public Service and Social Innovations under the President of the Republic of Azerbaijan.

In the report, international and national conferences were held, magazines published in Azerbaijani and English, along with articles from foreign authors. It was noted that in the reporting year, academician Nazim Mammadov was appointed as the authorized representative of the Azerbaijani government at the United Nuclear Research Institute. Currently, there are 20 Azerbaijani scholars working at the UNRI.

EaPConnect project was implemented to create a regional computer network to connect the science and education networks of the countries joining the Eastern Partnership initiative of the European Union, as well as to integrate the European scientific and educational networks into the infrastructure of Europe, direct broadband Internet access to all European scientific institutions, Nazim Mammadov lined out. It was noted that the Institute of Information Technology is the national operator of the international Eduroam service in Azerbaijan. Representatives of organizations joining this service will be able to access free and reliable internet access when visiting foreign scientific institutions.

Then the report has been approved. Significant results in the Division of Physics, Mathematics and Technical Sciences have been included to the annual report of the Academy. Various proposals have been made to increase the level of research, education and experience.

The next issue on the agenda has been the improvement of the Regional Experience and Resource Center for environmentally friendly agriculture at the Institute of Botany of ANAS.

Doctoral student of the Institute of Zoology of ANAS Narmin Beydizadeh has been sent to the Babes-Bolyai University of Romania, PhD on philology Aghahuseyn Shukurov has been appointed as Coordinator of the Encyclopedic Multimedia Fund "Father's Legacy" established by the International Turkic Academy.