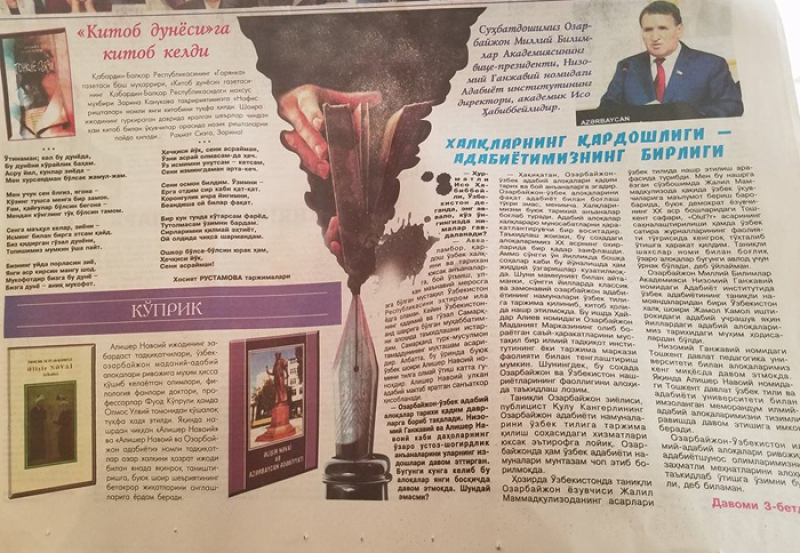 Academician Isa Habibbayli gave an interview newspaper to the "World of Books", Uzbekistan

ANAS Vice-President, Director of the Institute of Literature after Nizami, academician Isa Habibbeyli  gave an interview to the "World of Books" newspaper, Uzbekistan.

After the interview, in detail was discussed the work recently done in the development of mutual literary ties in Azerbaijan and Uzbekistan. Highly appreciating the activity of the Azerbaijan Cultural Center named after Heydar Aliyev in this regard, Isa Habibbeyli emphasized the importance of projects to publish samples of Azerbaijani literature by this center, preparation for publication in the Uzbek language of the works of the outstanding Azerbaijani writer Jalil Mammadguluzadeh.

The interview spoke about the work done at the Literature Institute after Nizami Ganjavi in the development of Azerbaijani-Uzbek literary connections. It was brought to the attention that, in order to conduct research on mutual cooperation at the Institute in 2016, was established Azerbaijan-Turkmenistan-Uzbekistan Literary Relations Department. At the same time, it was a meeting held at the Institute of Literature named after Nizami Ganjavi ANAS with the prominent Uzbek representative of the sixties, People's poet Jamal Kemal, as well as the prospects for a memorandum of cooperation concluded with the Tashkent State University of Uzbek Language and Literature after Alisher Navoi.

In his interview, academician also touched upon the importance of a deep and systematic study of literary, scientific and cultural ties between Azerbaijan and Uzbekistan.