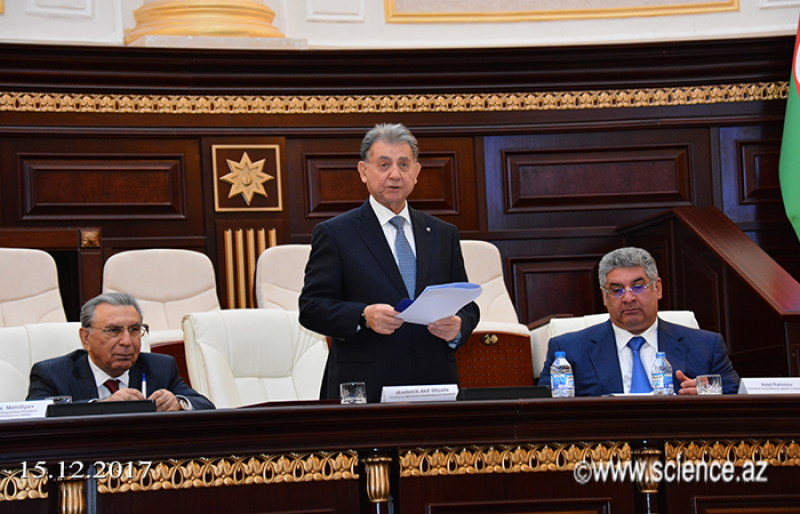 The 1st Congress of Young Scientists of Azerbaijan

The first congress of Azerbaijani young scientists has been held at Azerbaijan National Academy of Sciences on December 15, jointly organized by the Ministry of Education, Ministry of Youth and Sport. Participants of the event have come to the Alley of Honor to commemorate the national leader Heydar Aliyev and laid wreaths and flowers at his grave.

Before the opening ceremony, an exhibition reflecting achievements of Azerbaijani young scientists demonstrated. Participants of the exhibition were informed about young scientists' research, their innovative projects and their scientific findings.

Head of the Presidential Administration of the Republic of Azerbaijan, academician Ramiz Mehdiyev read a congratulatory letter of President Ilham Aliyev to the participants of the Congress.

Academician Akif Alizadeh, President of ANAS, told about the significance of the event organized according to the President of Azerbaijan Ilham Aliyev’s order on Approval of the State Program "Azerbaijani Youth in 2017-2021 "signed on September 15, 2017. Academician Akif Alizadeh noted that the State Program defines the goals of the youth policy more efficiently, revealing the innovative potential of young people actively participating in the socio-economic, cultural and spiritual life of the society, protecting the health of the younger generation and efficient use of modern information and communication technologies.

A.Alizade spoke about the challenges facing the Azerbaijani science, the contribution of young people to the development of various fields of science and achievements in innovative activities. The modern era and its socio-political realities, the new challenges of the world have identified a number of important tasks in the front of intellectual youth, stated President of ANAS. Akif Alizadeh lined out the work done in the Academy for the development of intellectual potential of the youth, their involvement in a broader range of scientific activities and their role in the formation of the knowledge society. One of the organizational measures in this direction is the establishment of the Young Scientists and Specialists Council of ANAS. In the recent years, complex measures have been undertaken to integrate science and education into the Academy, to ensure the education of young scientists in foreign scientific centers, to train them as highly qualified personnel, and to solve their social problems academician lined out.

The head of ANAS also said that , first of all, it is necessary to take practical steps to increase their creative potential and to determine their scientific missions. He noted that the scientific activities of young scientists living in the country and abroad should be co-ordinating at the level of modern requirements, and they should be more organized at the level of socialization and ultimately young people should be involved in scientific activities. Academician Akif Alizadeh expressed his confidence that the congress will be important in terms of broad discussion of the issues related to intellectual youth and determination of concrete action program. The President of the Academy congratulated the participants of the conference and wished them successes.

Speaking at the congress, Minister of Youth and Sports Azad Rahimov spoke about the youth policy implemented in the country. The Ministry of Youth and Sports is implementing a number of projects aimed at increasing the interest of teenagers and youth in science. Thus, the "Talent Preparation Laboratory" project has been implemented for 5 years. The project plays an important role in identifying pupils with mathematical thinking. Over the past five years, 8,000 teenagers participated in the Olympics in Physics, Mathematics and Chemistry. The winners are already successfully participating in the international Olympiads, minister emphasized.

Jeyhun Bayramov, the Minister of Education, noted that President Heydar Aliyev and his worthy successor, President Ilham Aliyev signed a number of decrees and orders for the development of science and education, and stressed that today highly qualified specialists and scholars are preparing to meet the country's economy.

Speaking about the quality of education and staff training, he said that the creation of SABAH groups in 2014, the changes in the "Regulations for the Credit System in Higher Education Institutions for Bachelor and Master Degree" and the provision of long-term concessional loans to students is a step towards expanding students' educational opportunities.

Speaking about the activities of the Small Academy in the secondary schools of our republic, Jeyhun Bayramov emphasized that these academies have special importance in establishing contacts with academics, summarizing and presenting scientific results, promoting students' conferences and competitions. Speaking about a number of issues such as the "Nizami" project implemented with the participation of the European Commission, the approval of a "Rules for holding competitions for Granting Scientific Activities" in 2017, the speaker noted that, strengthening the material and technical basis of higher education institutions and scientific organizations, ensuring the quality of scientific articles and scientific journals, and widening of the use of information and communication resources serve for sustainable development."