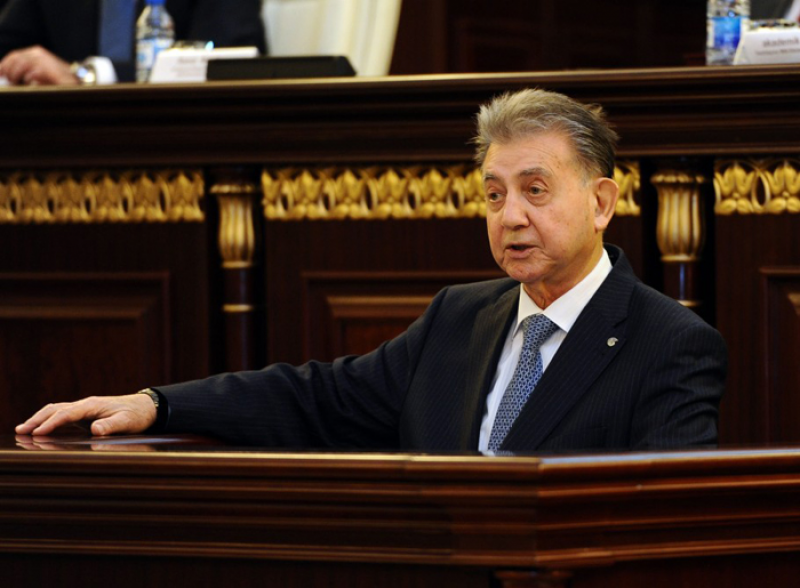 Today we have gathered in the first congress of Azerbaijan Young Scientists, holding for the first time in our country.

Over the decades, the Azerbaijani people have made numerous achievements in various fields under the leadership of national leader Heydar Aliyev and honorable Mr. Ilham Aliyev. Today's congress is also a logical continuation of youth policy in our country.

This congress is jointly organized by the National Academy of Sciences, Ministry of Education, Youth and Sports Ministry. The conference is attended by representatives of young scientists working in all scientific institutions and universities of our country.

I'm delighted to meet you in this magnificent hall. Welcome to the National Academy of Sciences, the highest science center of our country!

The policy of young people in our country is one of the most important directions of the activity of the Azerbaijani state. Consistent measures are being taken to ensure the physical and spiritual health of young people, their intellectual development, education and employment.

It is no coincidence that numerous decrees and orders were signed by the head of the country, Mr. Ilham Aliyev, regarding the youth policy, and a number of important state programs were adopted.

The Decree of the President of the Republic of Azerbaijan dated January 26, 2015 on "Approval of the Azerbaijan Youth Development Strategy for 2015-2025" has become a guarantee of youth policy.

The President of the Republic of Azerbaijan signed the Decree "On the Establishment of the Presidential Award for Youth" on July 2, 2013 in order to promote the achievements of the Azerbaijani youth in the fields of science, culture, literature and art, education and public spheres. Under the decree, the Presidential Prize is awarded once a year to young people who specialize in science, culture, literature and arts, education and social activities.

As a supreme scientific institution of the state, the Azerbaijan National Academy of Sciences has been working to improve the doctoral education to attract young people to the scientific activity, to set up various competitions, scholarships and grant incentives for young scientists and professionals, improve their social status, solve housing problem and other stimulating measures.

As you know, in 2015, for the first time in the National Academy of Sciences, the magistracy, which is the second stage of higher education, has been established and the magistracy education is being successfully carried out. In July of the current year, the Academy's first graduates were celebrated with great enthusiasm. Fortunately, all of them remain in the Academy and continue their academic career.

At the Academy, we are trying to establish a new level of master's degree and to create better conditions for masters to be trained as a professional. The educational environment that meets the modern requirements. At present, 123 masters study at the Academy. Approximately 30 members of the Academy, about 100 doctors of sciences and about 150 PhDs have been involved in the magistracy. If necessary, scholars from abroad are invited. Masters are taught at a high level in foreign language and informatics. The AzScienceNet network created by the Institute of Information Technology is very large and you can all use it.

In the Central Scientific Library of ANAS, Republican Competition "Sabah Scientists" was held in 2016 jointly organized by the Ministry of Education of the Republic of Azerbaijan, the Ministry of Youth and Sports, the Heydar Aliyev Center, the National Academy of Sciences of Azerbaijan and the Republican Committee of Free Trade Unions of Education Workers of Azerbaijan. Scientists of ANAS have been closely involved in the selection and consultation of the majority of schoolchildren participating in this competition.

Generally, stimulating the activities of young scientists and solving their social problems have a positive impact on the development of science. Therefore, it is crucial that stimulation of young scientists at the level of modern requirements is very important. We believe that science should be funded not only from the state budget, but from other sources, to increase the role of science in the development of the economy and society, and to perform large-scale tasks in this direction.

One of the most serious issues that everyone thinks is the social protection of young scientists. As mentioned above, stimulating scientific work, which is a complicated and honorable work, is a very important issue. This is especially important for young people who have recently discovered their own way of life. In recent years, the state has consistently taken measures to increase the salaries of scientists and to strengthen their social protection.

Housing security of young scientists is also very important. You know, we are working in this direction. Initially, a large number of scholars have been provided with keys to their private apartments. The majority of them are young people.

Relevant measures are being taken in the direction of conservation and rational use of land plots that are used by scientific institutions of ANAS in solving youth housing issues for the next stages. Specifically, the agreement was reached on the construction of a residential complex "Science City" for Azerbaijani scholars in the Saray settlement.

In general, the Academy accepts the integration of science and education as one of the most important directions and actively operates in this area.

It should be noted that, according to the agreement reached between the National Academy of Sciences of Azerbaijan and the Ministry of Education of the Republic of Azerbaijan, 210 students studying in SABAH groups established at higher education institutions have been trained in scientific institutions of ANAS.

With the support of ANAS, "Small Academy" has been established in a number of high schools of the country in the direction of integration of science and education. The goal of creating "The Small Academy" is to expose, attract, and unite students with talented, creative thinking, research-seekers.

Now I would like to say a few words about the important scientific achievements of the Young Researchers of the Academy of Sciences.

The participation of Azerbaijani young scientists in the Dubna International Scientific Center, as well as in the global scientific projects carried out in the SERN, is remarkable.

Based on the Memorandum signed with the United Nuclear Research Center, a group of young employees were sent to Dubna by way of competition to train highly qualified specialists in this area.

The young geophysicists have determined the legal geodynamic processes of the Caucasus based on space geodetic data.

Every year dozens of international scientific conferences and seminars are held in Azerbaijan organized by the National Academy of Sciences.

You should also be active in establishing international cooperation. Using modern information and communication technologies, it should create links with scientific centers around the world, and you must take an initiative in front of ANAS.

One of the ways to expand international relations is writing and publishing articles that are in line with the requirements of "Impact Factor" magazines in international databases.

Finally, I would like to sincerely congratulate you on holding the Congress! I urge you to be active in life and to work purposefully. You are able to walk in front of Azerbaijani youth with your intellect, innovative thinking and statehood. I wish you success in this regard!

I express my deepest gratitude to our distinguished President Ilham Aliyev for all the participants of the Congress on the conditions created for the comprehensive development of youth!

The congratulatory letter sent by Mr. President to the participants of the Congress is a manifestation of our country's high respect and confidence to young people!