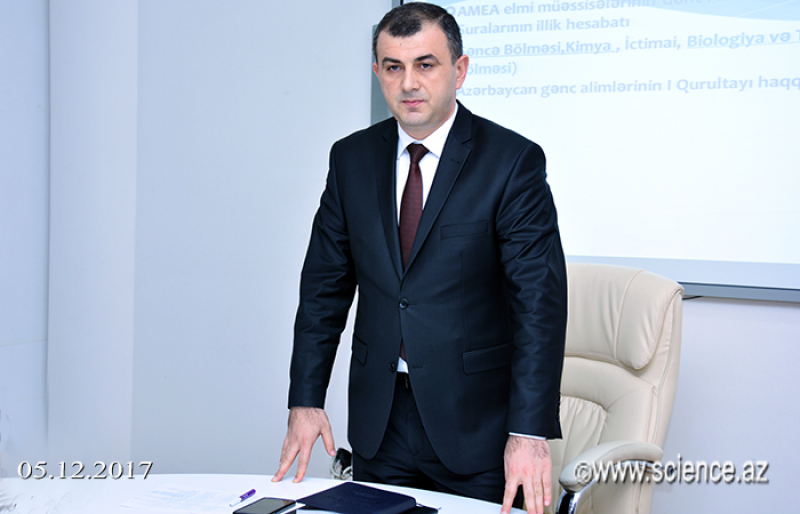 December 06, was held an assembly of ANAS Council of Young Scientists and Specialists (CYSC) on a report preparation of the year.

At the event, held in the assembly hall of ANAS Institute of Literature after Nizami, chairman of CYSC, PhD in Physics Famin Salmanov noted, that the meeting will be delivered reports on CYSC for the Councils of Young Scientists and Specialists of the of the Divisions of Public, Biological and Medical Sciences, as well as and Ganja Branch of ANAS.

F.Salmanov reported that, during the reporting period, Council of Young Scientists and Specialists of scientific subdivisions of the important events in the field of scientific and social activities and was achieved great progress. Chairman of CYSC noted that, important work done in the direction of creating the unity of science and education, increase the popularity of science, as well as the integration of domestic science into the international scientific space on the example of young professionals.

Then, F.Salmanov informed the members of the Board in connection with the preparations for the First Congress of Young Scientists of Azerbaijan, which will be held on December 15.

Then, the members of the council - Orkhan Abbasov, Afsun Sunjayev, Eshgan Babayeva, PhD in biology Zemfira Kadimova, Farid Seifullayev, Aida Dadashyeva and others expressed their comments and suggestions in connection with the reports.

In conclusion, the submitted reports were adopted by CYSC.