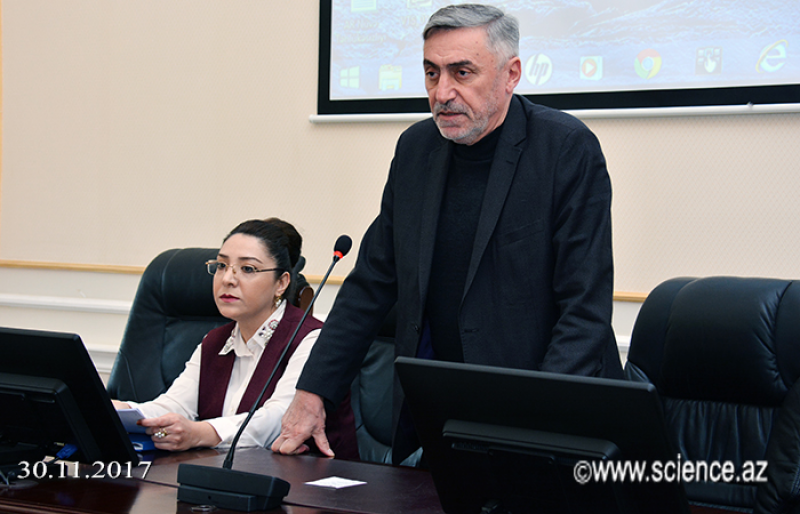 Discussed scientific journalism development and the existing problems at ANAS

A meeting with the participation of heads of public relations departments operating in institutions and organizations of Azerbaijan National Academy of Sciences (ANAS) has been held today.

The event has been organized by the Public Relations and Science Popularization Office of the Presidium of ANAS.

Developing scientific journalism, training professionals in this field, preparing scientifically-popular articles, discussing the problems of science in media and discussing ways to solve was the goal.

Speaking at the event, Zulfugar Farzaliyev, head of the Public Relations and Science Promotion Department, said that the creation of public relations department in each institution and organization of the academy was one of the important steps towards the development of scientific journalism by the decision of the Presidium of ANAS. Z.Farzaliyev noted the significance of this decision in terms of preparation and specialization of journalists in different academies. "They promote the Azerbaijani science together with populists-scientists" he lined out.

The chief of the office also touched upon the activity of ANAS Elm newspaper, www.elm.gov.az website and the activity of Elm TV Internet TV. Noting that the media have played an important role in the broad dissemination of scientific knowledge and scholarly research, scientific organizations and institutions have called for mobilizing all their forces to establish closer ties with other media and promote Azerbaijani science.

Ulviyya Rzayeva, deputy head of the Public Relations and Science Promotion Department, spoke about the current problems in the field of scientifically-popular articles of science, essential part of science. Journalists at the public relations departments are firstly aware of the research carried out in the institutes. The main task is to prepare these materials in an operative manner and to promote them in the media. It is necessary to demonstrate a higher level of activity for the sake of scientific activity and achievements, she emphasized.

The deputy head of the Scientific Research Institute offered the creation of a web-site of the Scientific Journalists Club - www.ejk.az, expressing the expediency of gathering all materials of scientifically-popular style in a single information resource. Rzayeva also drew attention to the organization of meetings, trainings and competitions with populist scientists, promote the development of scientific-popular journalism.

Speaking at the event, Head of the Public Relations Department of the Public Relations and Science Department of the Presidium of ANAS Sabuhi Gahramanov touched upon the existing problems in the development and promotion of scientific literature in the republic. Noting the importance of the publication of scientific and popular books and magazines, S. Gahramanov said that the author, publisher and journalist could develop scientific-popular literature in Azerbaijan. The department chief emphasized the importance of organizing relevant courses and trainings to address the problems.

Then they exchanged views on propaganda of science in mass media, information provision of web-sites of academy institutions and other issues. In the first quarter of each year, it was decided to issue annual reports by the heads of public relations departments.