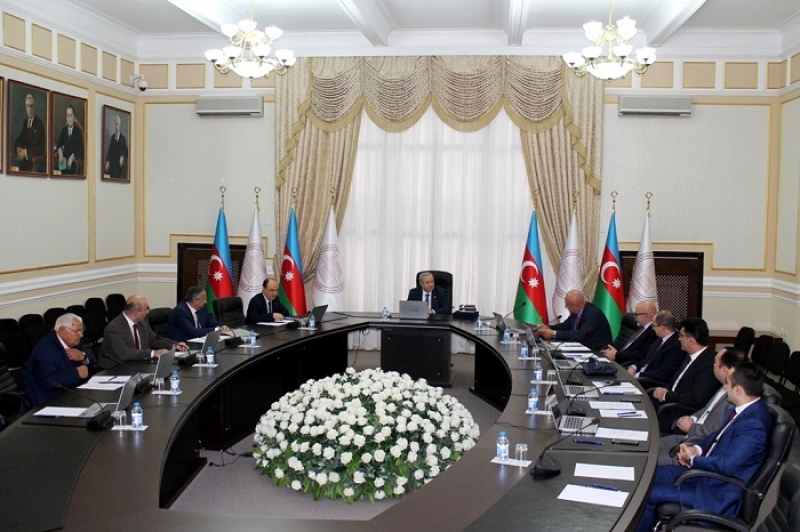 ANAS Presidium held a meeting dedicated to the issue of "Education-science-business".

The event was attended by ANAS Vice-President, Academician Dilgam Tagiyev, head of Office of ANAS Administration, Doctor of Political sciences Fatali Abdullaev, Director of the Park of High Technologies (HTP), PhD in agrarian sciences Vugar Babayev, head of the Office of Science and Education, corresponding member of ANAS Aminaga Sadigov, chairman of the Bulgaria-Azerbaijan Chamber of Commerce and Industry Dimitar Bratanov, general manager of the Bulgarian company Plamen Tashkov, General Director of “EPC Group” LLC Mohammad Miyabi and others.

Speaking at the event, Academician Dilgam Tagiyev told the guests from Bulgaria about the activities of the High-Tech Park, created in accordance by the Order of AR President Ilham Aliyev dated November 8, 2016. He noted that, HTP, which supports scientific and innovative projects, which carries out the commercialization of science, has been awarded several international certificates. He brought to the attention that Azerbaijani scientists cooperate with Czech, Russian and Bulgarian counterparts.

Then, informing about the companies of Bulgaria, Dimitar Bratanov told about the innovative products they produce. Noting the interest in cooperation with the academy, the chairman stressed that he was directly involved in the successful implementation of projects in Azerbaijan. He expressed confidence that joint cooperation between the two countries in various fields, including science, will yield positive results.

Speaking later, HTP Director Vugar Babayev, greeting the guests, stressed that, the ties between Azerbaijan and Bulgaria have historically existed in various directions. Vugar Babayev highly appreciated the participation of guests in the implementation of projects.

Then, Mohammad Miyabi expressed confidence that he will contribute to this project and said that the institution he leads will produce commercial products.

Aminaga Sadigov spoke about the cooperation of ANAS with the centers of science and education in Bulgaria.

In conclusion, to guests were donated gifts.

After the meeting, the guests also visited the HTP.