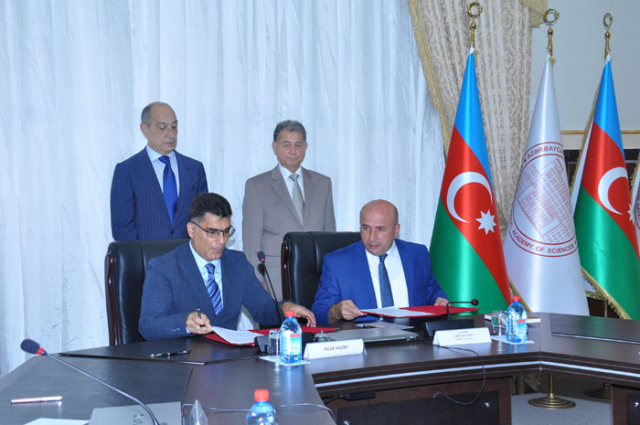 Speaking about the prospects for cooperation at the signing ceremony, ANAS President, Academician Akif Alizadeh noted that, main goal is to organize the unity of science and business. The scientist stressed that, ensuring the integration of science and production is a significant innovation for the Azerbaijani science.

According to him, the results achieved in this direction will play an important role in the scientific and public life of ANAS.

Then, Reza Veziri said that, today the basis of cooperation between the structure wich he represented and ANAS, and expressed confidence that these relations will play an important role in the development of Azerbaijani science.

Director of "EPC Group" LLC Muhammad Miyabi expressed interest of the company in cooperation with ANAS HTP in order to commercialize scientific research and discoveries. He noted that, specializing mainly in the field of engineering "EPC Group" has a large business team and international experience in the field of investment.

"EPC Group" which is carrying out introduction of various opening and results of scientific research has set a goal to realize commercialization of successful results of development of technologies, using possibilities of the existing international network.

Then, recalling the agreement on cooperation signed between two structures in February of this year, Director of ANAS HTP, PhD in Agrarian Sciences Vugar Babayev informed that, regular meetings and wide discussions were held within 6 months.

Stressing the importance of transferring innovative projects to production through the use of scientific potential in Azerbaijan, Director of HTP noted that, the agreement that is to be signed today will be the first document in the country providing for the integration of science and business.

Especially noting the role of entrepreneurship in carrying out scientific research, V. Babayev said that, the agreement will reflect the issues related to the establishment of a biotechnology center, the provision of support to scientific research and many other issues.

In conclusion, V.Babayev informed that, products obtained as a result of the commercialization of scientific discoveries are intended not only for the domestic but also for the external market.

Then, ANAS Academician-Secretary, Academician Rasim Alguliyev highly appreciated the activity of the High-Tech Park, established by the Order of the President of the country. He noted that, within a year the HTP gained great prestige in the country and achieved great success. It was stressed that, this structure gave impetus to the development of business thinking and innovative thought, and also expanded the opportunities for cooperation in the relevant fields. Having brought to the attention that, the fundamental research is one of the priorities of ANAS, scientist informed that, in this scientific structure comprehensive measures are being taken to integrate science and commerce and form the knowledge economy.

In conclusion, between two structures was signed agreement on cooperation. The document was signed by the Director of the HTP V.Babayev and head of the EPC Group LLC M.Miyabi.

The contract provides for the creation of the necessary conditions for the activities of the "EPC Group" in the field of industry. The cooperation will also address issues related to the provision of modern equipment for laboratories intended for the implementation of innovative projects, the organization of areas for the creation of pilot plants, and the formation of a working group.