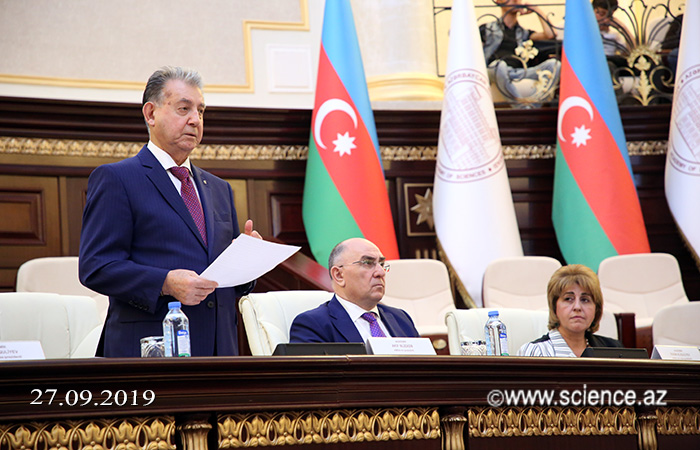 ANAS President, academician Akif Alizadeh opened the event, spoke on the significance of the Order of AR President Ilham Aliyev “On the celebration of the 110th anniversary of Academician Vladimir Volobuev” dated May 14, 2019.

He informed that, the scientific activity of an outstanding scientist is mainly related to basic research on land reclamation, compilation of geomorphological maps, the relationship of land and climate and the ecology of the earth, academician added that, the scientist defined his principles and calculations, put forward by the theory and developed classification made a great contribution to the development of soil science in Azerbaijan. V.Volobuev created a scientific school in this field and was highly appreciated for the training of young specialists.

V.Volobuev was awarded the V.Dokuchaev Prize for his services in developing the soil-climate concept. The merits of the scientist were also highly appreciated by the state, he was twice awarded the Orders of the Labor Red Banner, Friendship of Peoples, Honor and medals.

Head of ANAS noted that, a great scientist made a significant contribution to the development of soil science and land reclamation in Azerbaijan and his memory will forever remain in the hearts.

Further, academician-secretary of ANAS Division of Biological and Medical Sciences, academician Ahliman Amiraslanov delivered a report on the role of academician Vladimir Volobuev in the development of biology and agricultural sciences. Speaking about scientist’s effective scientific activity and his contribution to the development of agricultural science, the speaker noted that, his research is distinguished by a variety of directions.

Speaking on V.Volobuev's activities in the field of soil science and land reclamation, planning, coordination, organization and development of sciences such as agrochemistry, botany, zoology and physiology, A.Amiraslanov said that, he supported the ideas by academician Jalal Aliyev in creating and developing the modern scientific in field of Azerbaijan biology, as well as the involvement of specialists from various fields of research in relevant fields.

Head of the laboratory of ANAS Institute of Soil Science and Agricultural Chemistry, Doctor of Agricultural Sciences Mustafa Mustafayev delivere a presentation on "Scientific and scientific-organizational activities of Academician Vladimir Volobuev".

He said that, as part of the expedition under the leadership of Professor S.I.Turemnov, he arrived in Azerbaijan and conducted research to study the water-physical properties and salinity of soils in Mugan. Arriving in Azerbaijan in 1930, he devoted his whole life to the study and land improvement in our country until the end of his life.

He noted that, for the first time a well-known scientist developed a system of hydrothermal contact with the soil and also laid a direction that is new in teaching soil ecology. M.Mustafayev emphasized that, academician V.Volobuev is the author of 5 monographs, about 200 articles, 4 maps and 5 patents. M.Mustafayev said that, academician V.Volobuev will remain in memory as an outstanding scientist in the field of soil science and land reclamation.