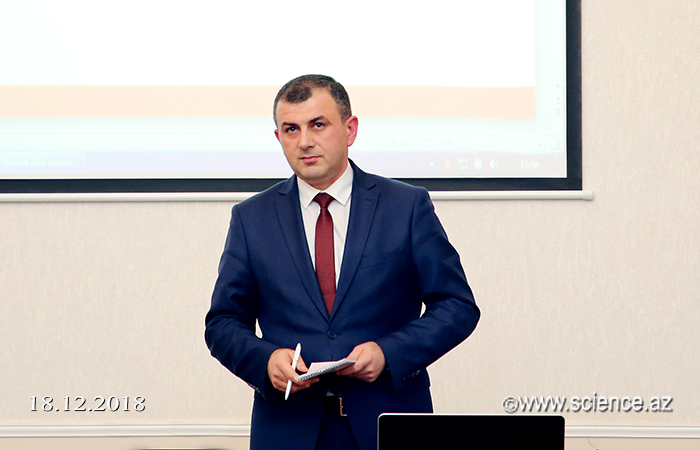 A meeting devoted to the discussion of reports of the Young Scientists and Specialists Council of the ANAS on the sections at the Institute of Geology and Geophysics.

Reports of Physics, Mathematics and Technology, Biology and Medicine as well as Earth Sciences departments .

The chairman of the Young Scientists and Specialists Council, PhD in Physics, Associate Professor Famin Salmanov emphasized the necessity of widening of scientific activity in the reports to be presented, as well as the special attention of the council to for the next five years.

Earlier, Chairman of the Young Scientists and Specialists Council of the Institute of Molecular Biology and Biotechnology, PhD in Biology, Ulduzha Gurbanova presented the report of the Department of Biology and Medical Sciences at the general meeting.

Reports on the current year's achievements compared to previous years, according to the articles published in journals referring to the number of youth organizations working at scientific institutions of ANAS, the number of statistic indicators on organizations, the activity of youth in international and local scientific events, scientific publications, including Web of and Scopus were also listened. In addition, reports were given on conferences and seminars organized by local councils, projects implemented in the field of scientific enlightenment, as well as socio-public and sports events.

Following the general discussion, reports on sections were evaluated and recommended to increase activity in the activities of councils operating in some institutions.