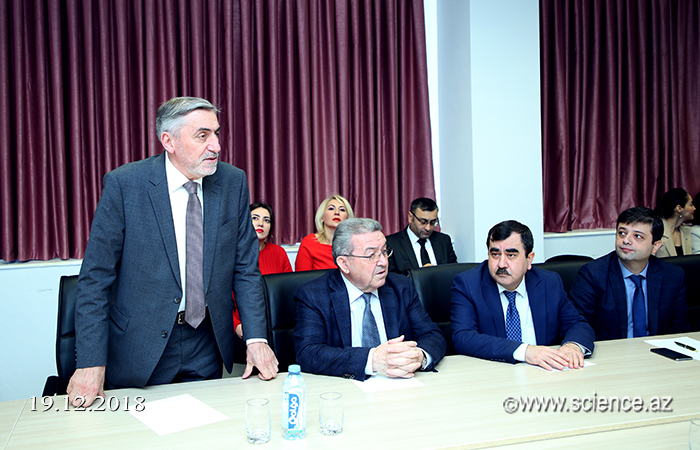 The Round Table on "The Role of Mass Media in Popularization of Science" was organized by the Press and Information Office of the Presidium of ANAS and with the support of the Free Trade Union of ANAS.

Heads of public relations departments of the institutes of ANAS and media representatives.

Speaking at the event, Zulfugar Farzaliyev, head of the Press and Information Office of the Presidium of ANAS, said that there is a great need for of science in modern society and emphasized the role of the media in this process. He spoke about the great responsibility of journalists on the promotion of reliable, objective information on the state of science in the society, promotion of science and scientific knowledge and achievements, and spoke about the role of the media in raising public interest in academic research. Head of the office noted the importance of the preparation of articles in the field of training in this field and the correspondence with scientific and popular style and said that the quality and quantity of scientific information published in the media is not at any level.

Ulviyya Rzayeva, Deputy Chief of Press and Information Department, has released the results of the monitoring conducted in more than 20 leading newspapers and news sites in the country. She pointed out that the ideas about the essence of the research have not gone beyond the scientific style, and that the problems in the field of writing articles that meet the scientific-popular style have been discussed.

U.Rzayeva emphasized that the emergence of completely new science fields, which is closely related to the dynamic development of different spheres, complicates the work of popularizing science. New fields such as biophysics, quantum biology, bionics, , , recombinant mathematics, computational sociology, cognitive economics demands journalists to have , productive activity. Deputy Chief emphasized the importance of establishing close cooperation between media representatives and academics and expressed confidence that the joint efforts of the National Academy of Sciences and Mass Media and Universities to engage in popularization and promotion of science would make significant contributions to the development of this field.

The event also touched upon the issue of staffing in the development of science journalism. It was emphasized the necessity of taking practical steps in the field of teaching of this field and emphasized the necessity of the history of formation and development of science journalism in Azerbaijan, study of various problems, including preparation of textbooks and of dissertations. It was proposed not only in Journalism faculties but also in other faculties to teach the Popular Science subject.

Also, it was emphasized the importance of organizing and trainings for students in scientific institutions and organizations, and holding joint events dedicated to addressing various problems of science journalism.

At the end of the meeting, the representatives of various Mass Media were awarded of appreciation by the ANAS for their contribution to the promotion of science.