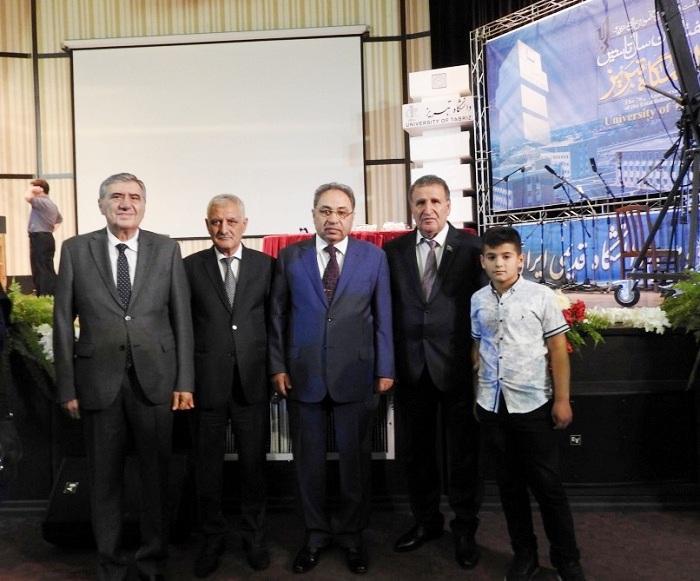 On August 29 was held a solemn event devoted the 70th anniversary of the Tabriz University. First, the participants of the event visited a monument erected in memory of those who died for the territorial integrity of Iran.

The rector of the Tabriz University, Professor Rza Purmukhammedi opening the event, spoke about the history, activities and international relations of the institution he leads. He noted that, University of Tabriz is one of the best higher institutions, there are such faculties as history, literature, physics, chemistry, biology, medicine, law, etc. He said that the university plays an important role in socio-political and economic life of the Iranian province of Eastern Azerbaijan.

Further, the rector of BSU, academician Abel Maharramov noted that, in recent years the relations between Iran and Azerbaijan have been developing in all fields, including education. He noted that joint programs and grants are continuing, and students are also exchanging information. Speaking about mutual cooperation in the humanitarian sphere, Abel Maharramov noted that for many years a large scientific school on Persian language and literature was created in BSU.

Vice-president of ANAS, academician Isa Habibbayli said that, participation of two academicians from Azerbaijan at the event of the 70th anniversary of Tabriz University is a vivid example of the development of relations between the two countries. He noted that the Tabriz University occupies a special place in the scientific environment of Iran and the articles of the institution's teachers are published in prestigious scientific journals of the world.

Noting the history of relations between the Tabriz University and the Nakhchivan State University, Academician Isa Habibbayli noted that to date, both institutions are carrying out joint research projects and student exchange. He also brought to attention the joint events of Muhammadahuseyn Shahriyar and Shams Tabrizi, Isa Habibbayli noted that, the cooperation between Azerbaijani higher education institutions and the University of Tabriz will continue.

Within the framework of the event a Memorandum of Cooperation was signed between BSU and Tabriz University for further development of scientific relations between universities.

The event was continued by the cultural program with the participation of the Tabriz Symphony Orchestra.