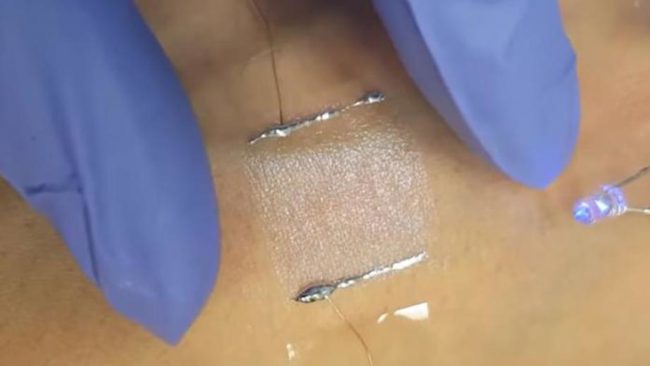 In various spy movies, it is often possible to see how the characters use different gadgets to listen to, built-in household items. But these things can make a really high-tech. For example, experts from the National Institute of science and technology Ulsan (Korea) has developed nanomembrane – transparent, virtually invisible coating, which can capture and reproduce the sound.

It is worth noting that this is not the first “nanotechnology” speaker and microphone. Was previously created similar cells based on nanotubes and graphene, but they had a serious drawback in the form of distortion of sounds. New elements created on the basis of nanofibers of silver, which form a membrane. At the end it looks like a transparent film, which without any damage can be applied to the skin.

This film can work as a speaker and as a microphone. During the demonstration occurred almost a real “magic” – a barely noticeable film lost song La Campanella by Niccolo Paganini. The principle of the device is quite simple: if the film acts as a speaker – she over a wireless interface is connected for transmitting the sound to the gadget, and passing current heats it and the surrounding air, and thus sound is produced. When operating in microphone mode the process is reversed: the film converts the sound waves into current, they are recorded and transmitted to a recorder or other recording device.

To manage this device by using gestures or voice. According to scientists, the percentage of correct gesture recognition is around 98%, which is very, very good result. In addition, the film can be used to remotely control a smartphone and other electronics.