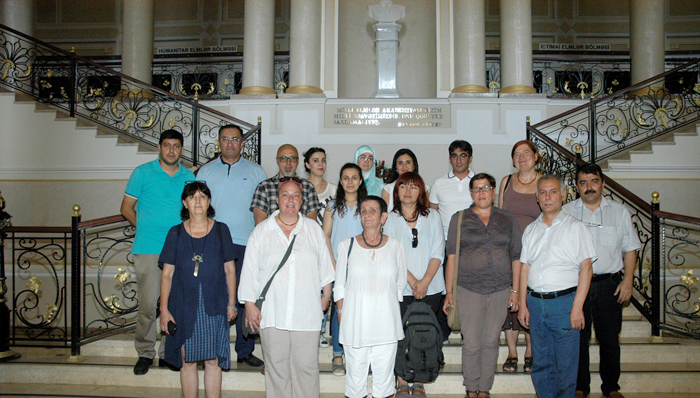 Organized a scientific seminar jointly with Bulgarian scientists within the framework of the European Commission's “Horizon: 2020” program

A seminar was held with the participation of a group of scholars of Sauth-West University named after Neofit Rilski in Blagoevgrad, Bulgaria, who are on scientific trip on “Exchange of knowledge and academic achievements in humanitarian sciences, Europe and Black Sea region” project financed by European Commission "Horizon: 2020" Maria Skladowska Curie action on July 18.

Representatives of the Institute of Archeology and Ethnography and History of ANAS, presenting Azerbaijan in the project, participated in the scientific seminar.

Director of the Institute of Archeology and Ethnography, Doctor of History Maisa Rahimova reminded that in May of this year, a large delegation of ANAS delegation met in Sofia within the framework of scientific cooperation, as well as an agreement on cooperation was signed with the Institute of National Archeology of the Academy of Sciences of Bulgaria (jointly with the museum). She spoke about the prospects of Azerbaijan-Bulgaria scientific cooperation and wished success to the work of the seminar.

Later, Azerbaijan and Bulgaria scholars talked about the history, culture and history of science in the 19th and 20th centuries.

Scientific reports of Azerbaijani researchers in the scientific workshop were mainly devoted to "Social and Cultural Reforms in Azerbaijan at the end of the XIX - early XX centuries", " Manifestation of Globalization in the South Caucasus in the First Bronze Age in South Caucasus: New Places on Kur-Araz Culture", "Archeology in Neo-Modernism, "Archeological theory in the Soviet and post-Soviet space: manifestation of primordialism and new archeology".

During the upcoming event, the members of the project discussed issues, exchanged views on joint cooperation, and answered questions.