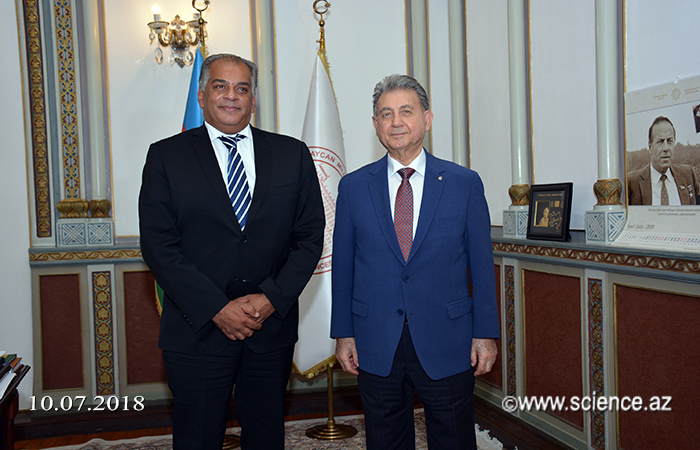 A meeting with the Ambassador of Egypt to Azerbaijan

On July 10, at the Presidium of ANAS, a meeting was held between the newly appointed Ambassador Extraordinary and Plenipotentiary of the Arab Republic of Egypt to our country Adel Ibrahim and director of the Center for Culture and Education of Egypt Ahmed Sami Elaydi. The main purpose of the meeting was to discuss the prospects for cooperation between the scientific institutions of the two countries.

Firstly, academician Akif Alizadeh, president of ANAS, informed the guests about the history of the ancient science house and its main scientific directions.

Highlighting the studies carried out at the Egyptian universities, academician A.Alizadeh emphasized the importance of establishing a trilateral relationship between the institution headed by him and the staff and experience exchange in the relevant field, scientific and educational institutions of both countries. The head of ANAS underlined that they are interested in studying Egyptian scientific experience especially in the field of humanitarian and social sciences.

Informing about ANAS High Technology Park, A.Alizade said that this enterprise successfully works towards expansion of innovation and high technologies based on modern scientific and technological achievements.

Academician A.Alizadeh briefed the ambassador on the researches on studying volcanoes in our country by presenting the "World mud volcanoes" atlas prepared by the Azerbaijani specialists. He said more than 3,000 volcanoes were listed in the atlas around the world.

Afterwards, Ambassador Adel Ibrahim noted the cooperation between Azerbaijan and Egypt in the field of science, education and culture for many years. Speaking about the Academy of Scientific Research of Egypt, the guest expressed readiness to render necessary assistance in the establishment of scientific relations between ANAS and this institution.

The ambassador invited the head of ANAS with his delegation to Egypt for the continuous development of cooperation.

They also exchanged views on the strengthening of Azerbaijani-Egyptian scientific relations and the implementation of joint projects, and made relevant decisions.

At the end a photo was taken.