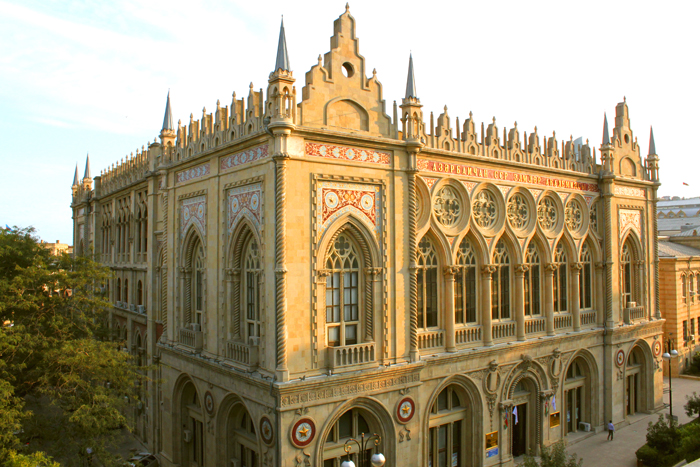 Report on the activities of the ANAS Presidium for 2017 approved

On June 8 at the annual General Meeting of the Azerbaijan National Academy of Sciences, the report on the scientific and scientific-organizational activities of the Presidium of ANAS for 2017 and forthcoming tasks was considered.

The report notes that, in 2017 the Academy carried out important activities aimed at further developing the existing scientific and technical potential, expanding international scientific ties, strengthening the links between science, education and the economy, training highly specialized personnel, coordinating research activities, directing scientific research on the solution of socio-economic problems, strengthening of national statehood, raising the international authority of the republic, etc.

According to the relevant orders of President Ilham Aliyev, in the reporting year salaries were raised for employees of scientific institutions and organizations that are financed from the state budget, scholarships for doctoral students, students and students of higher educational institutions, secondary specialized and professional educational institutions, as well as undergraduates of ANAS. In addition, according to the relevant orders of the head of state, scientists with special merits in the development of science were awarded the highest state awards, the memory of outstanding scientists was immortalized and their jubilees were celebrated at the state level.

In 2017, at the sessions of the Presidium of ANAS, a number of important resolutions were adopted, related to the increase in the productivity of the scientific and scientific institutions of the Academy, the improvement of scientific and organizational, structural and personnel activities, regulatory documents.

In accordance with the State Program "Azerbaijani Youth in 2017-2021", which was approved by the presidential decree of September 15, 2017, with the joint organizational support of ANAS, Ministry of Education and the Ministry of Youth and Sports, Congress of Young Scientists of Azerbaijan.

Last year, scientific institutions of ANAS took an active part in accomplishing the tasks set in the "Strategic Roadmaps for the National Economy and the Main Sectors of the Economy", the Development Concept "Azerbaijan 2020: Looking into the Future", "The National Strategy for the Protection and Sustainable Use of Biological Diversity in Azerbaijan Republic in 2017-2020 ", as well as in the implementation of 15 state programs and other state orders.

The report says that in 2017, in accordance with the pace of formation and development of the information society, a significant leap in the formation of electronic science, which is an integral part of electronic Azerbaijan, was ensured its integration into e-education and other online spaces. The infrastructure of the AzScienceNet Scientific and Computer Network, which is a platform of electronic science, was reconstructed, its technological base was modernized and the functional capabilities of the network were significantly increased.

During the last year's elections, 16 full-time members and 25 corresponding members of ANAS were elected. 12 scientists in the republic were awarded the title of "Professor of ANAS".

The number of specialties and places in the Academy's magistracy for the 2017/2018 academic year increased, as a result of which in the 12 specialties and 39 specializations in the magistracy were accepted 67 people who scored high scores.

In the reporting year, the scientific institutions of ANAS signed more than 70 documents on cooperation, organized more than 50 international events. In 2017, ANAS scientists took part in contests for receiving grants announced by various organizations, and won 117 grants.

The scientific results of about 1500 scientific research works that were conducted last year were reflected in 8900 articles and theses, 532 books and monographs, and 50 patents were obtained.

After the discussion at the General Meeting, the report was approved. According to the decree, the activity of the Presidium of ANAS in 2017 was recognized as satisfactory. The resolution reflected the issues related to the implementation of the forthcoming tasks aimed at the development of science, the active participation of ANAS in international megaprojects, including projects implemented jointly with the Joint Institute for Nuclear Research (Dubna) and the European Center for Nuclear Research (CERN) , the development of programs aimed at conducting fundamental research in the field of nanostructures and nanotechnologies, as well as solving scientific problems in the environmental and agrarian spheres. In addition, the resolution touches upon such issues as the study of structural biology and population in Azerbaijan, including the molecular genetic foundations of hereditary and non-hereditary diseases, the study of the human genome in the republic, the expansion of multidisciplinary research in the field of computer genomics and bioinformatics, the implementation of in the ANAS strategic activities related to the strengthening of the defense power of the state, the creation of a unified national scientific online infrastructure and information of space, strengthening of information support of science, ensuring the integration of domestic science in the world, even greater intensification of infrastructure Scientific network of AzScienceNet, aimed to ensure that the staff of institutions and organizations of ANAS able to use opportunities offered by scientific and educational networks around the world.