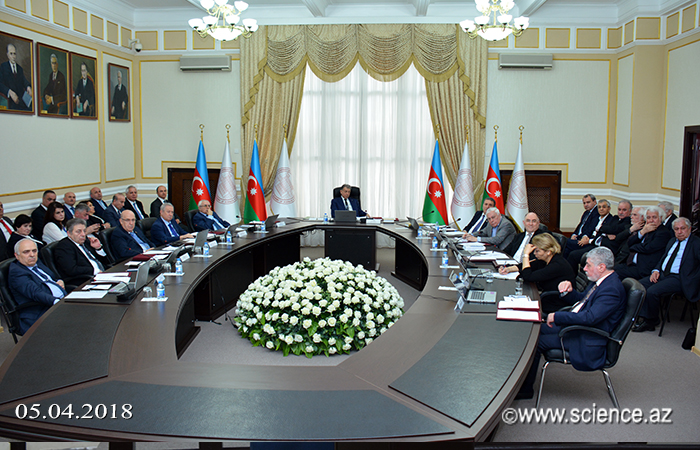 On April 5, the next meeting of the Presidium of the Azerbaijan National Academy of Sciences was held.

Academician Akif Alizadeh, president of ANAS, informed about the agenda.

At the event, the status of the work carried out within the framework of the Cooperation agreement signed between ANAS and the United Nuclear Research Institute (UNRI) discussed. Academician Ibrahim Guliyev, vice-president of ANAS, said that currently 19 specialists from Azerbaijan work at UNRI.

Presidium decided to consider the status of the works carried out within the framework of the cooperation agreement signed between ANAS and UNRI. The relevant instructions were also given to the authorized representative of the Government of the Republic of Azerbaijan at the UNRI, academician-secretary of the Department of Physical-Mathematical and Technical Sciences of ANAS, academician Nazim Mammadov.

The next issue on the agenda was on the activities of ANAS in 2017. Academician Rasim Alguliev, academician secretary of ANAS, said that a draft report was prepared on the basis of the materials presented by the members of ANAS, scientific departments and enterprises, scientific institutions of relevant ministries. The report contains important findings of fundamental and applied research carried out in the ANAS, as well as other science and education institutions in the country in 2017, scientific and organizational activities of the Presidium and other indicators of the academy's activity. Presidium made a decision to approve the report on activity of ANAS for 2017 and submit it to the General Assembly of ANAS.

At the end, personnel issue was discussed. By the decision of the Presidium, Doctor of Sciences, Professor Maisa Rahimova has been appointed Director of the Institute of Archeology and Ethnography.