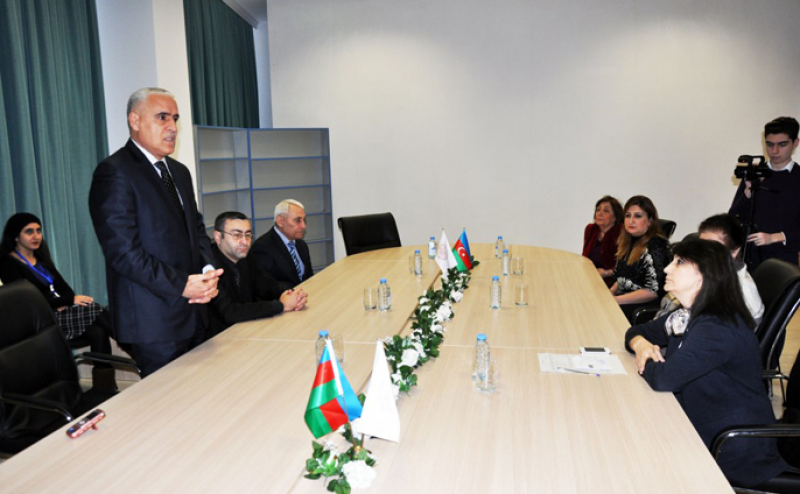 ANAS Central Scientific Library held a meeting with the leadership of the newspaper “Iki Sahil”.

The goal is to transform the process of enriching the CSL's printing fund into a tradition, to ensure that the leading media agencies bring this process to the public, and to discuss cooperation issues.

At the event, Director of the library, PhD in medicine Leyla Imanova spoke about the library activities, strategic goals, the results of 2017. During this time the library carried out numerous initiatives and a number of important projects.

L.Imanova noted that, due to close cooperation with the representatives of mass media, the CSL's multifaceted activities are covered in the press and on the website www.mek.az. The scientist stressed the importance of the agreement reached in 2017 between the leadership of ANAS and the Press Council in the field of changes occurring in science, propagation of development processes through the press, collection, systematization and reliable preservation of information.

Then, the editor-in-chief of the newspaper "Iki Sahil" Vugar Rahimzadeh told about the rich and glorious history and the way of development of the organ of the press headed by him. The first issue of the newspaper “Iki Sahi”l was released on July 10, 1991.

V.Rahimzadeh noted that, since the establishment of the newspaper "Iki Sahil" correctly and clearly uses the possibilities of freedom of speech and the press, remains faithful to the traditions of journalism, serves to protect national interests and statehood. It was said that, at the all-republican meeting held on the occasion of the 2nd anniversary of the founding of the New Azerbaijan Party, the great leader Heydar Aliyev praised the role of the newspaper “Iki Sahil”.

The editor-in-chief said that, today the newspaper "Iki Sahil" carries out its activities in print, electronic forms, and also through Internet television. Then he gave the library published in 2017 copies of the newspaper, intended for inclusion in the National Digital Memory database.

At the end of the meeting, the parties signed an agreement on copyright protection and stressed the need to further expand cooperation.

Then, the guests got acquainted with the work of the main book storages, the Rare Book Foundation, the collection of the Society of Geologists in the Department of Earth Sciences, the Diplomatic Foundation in the academy hall.