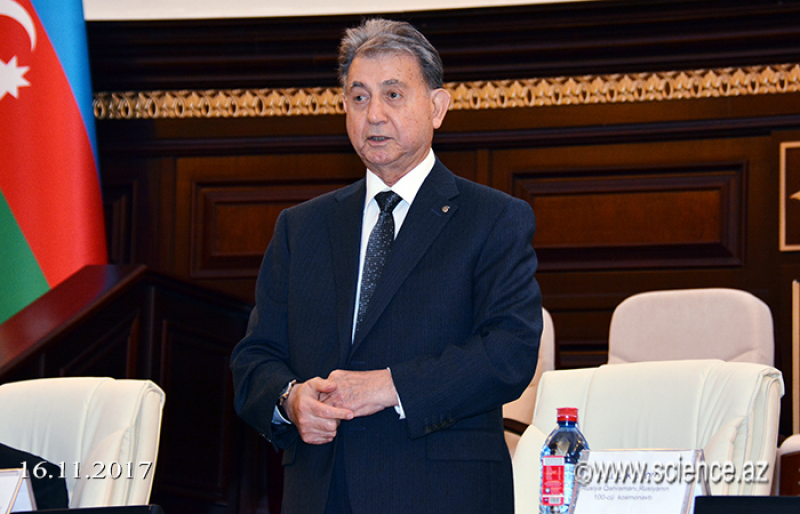 This year, outstanding scientist and military figure, an active participant in the implementation of space programs, Hero of Socialist Labor, laureate of the State and Lenin Prizes, honorary member of the National Academy of Sciences of Azerbaijan, Lieutenant-General Kerim Kerimov is 100th.

ANAS held event dedicated to the jubilee of the scientist on November 16. Speaking at the event, President of ANAS, Academician Akif Alizadeh noted that, Kerim Kerimov’s 100th anniversary held in accordance with the Order of President Ilham Aliyev dated January 30, 2017. Head of ANAS spoke about the exceptional merits of Kerim Kerimov in the creation of space vehicles and the development of cosmonautics. Academician said that, along with the fact that Kerim Kerimov was a military leader, he was engaged in scientific creativity, made a great contribution to the study of space prostration.

Then, chairman of the Board of Azercosmos OJSC Rashad Nabiyev reported on the application of the scientific and technical results in the space industry, which were obtained thanks to the research of Kerim Kerimov. R.Nabiyev spoke about the current activities of the company, its satellite communication services and perspective plans.

Russian cosmonaut Oleg Kotov delivered a paper on "Perspective program for the development of manned space flight in Russia". O.Kotov spoke about the practice of research and study of outer space with the help of manned spacecraft.

At the jubilee event, Roald Sagdeyev an outstanding physicist and member of the Academy of Sciences of the USSR also spoke about space projects headed by Kerim Kerimov, the scientist's merits in the creation and development of Soviet cosmonautics and missile installations, shared his memories of the legendary personality.

Further, in his speech, First Deputy Director General of the National Aerospace Agency of the Ministry of Defense Industry of the Republic of Azerbaijan, Doctor of Technical Sciences Tofig Suleymanov spoke about Kerim Kerimov's life and activities, about the organizational abilities demonstrated by the scientist while working in design bureaus and factories where missile technologies were created his scientific discoveries.

In conclusion, was demonstrated the documentary dedicated to the memory of a prominent scientist "An outstanding scientist, Lieutenant-General Kerim Kerimov".